TURN TO A HERO

When I was about 3 years old, I vanished at a picnic. My family panicked, until they found out that I'd just followed my uncle to the old dug out latrine toilet and came back with him, unconcerned. I got lost a few times as a kid, once in a Piggly Wiggly in Farmington, New Mexico, but according to my mom never was upset by it. I knew someone would come along eventually.

However, I've never been in a monster crowd like ComiCon. That place gets tens of thousands of people, some of them very strange and disturbed individuals. I don't know how I'd have reacted if I lost my dad there.

This tyke couldn't find his dad so he went the first place he knew of to find help: superheroes. 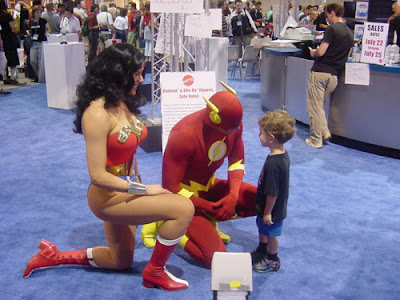 Apparently both costumed heroes stayed in character and helped him find his father. Which is pretty heroic, really.

Children seem to naturally understand the superhero and what they are supposed to be like. They respond positively to a brightly colored costume and a basic concept of right and wrong. They help people in need and stop bad guys: justice. Unfortunately, modern comic book writers just don't seem to understand those basic principles and have turned superheroes into brutal leather-wearing vigilantes.
Posted by Christopher R Taylor at 8:30 AM

For some reason, I think I'd have gravitated towards Wonder Woman myself.