THE TIME FOR COLLEGES IS AT A END

"Whether your own college experience was more like The Paper Chase or Animal House, you can be sure that today’s campuses are neither."

There is a great deal of misunderstanding when it comes to the purpose and importance of a college education. Most people view it as a sort of trade school: go to college for a better job. From this perspective, colleges are a horrible investment, particularly these days. You can go into debt fifty to a hundred thousand dollars, take half your working life paying it off, and these days go more than a year without finding any work, let alone a job in your field of education.

The truth is, most degrees are worthless for finding a job in that field. Getting that degree in Sanskrit or Medieval poetry is not going to help you in any way, unless you become a professor in that field; sort of a pyramid scheme of education. And people have always had trouble finding work in almost any field they get a degree in. They end up working restaurants and golf courses struggling to put that business or political science degree to work.

The few jobs which actually do directly come from a college education such as law or medicine are never about the rest of the education anyway. They're about going through the motions then doing the hard work of residency and passing the bar. Its true that having a degree - any degree - helps a lot in being hired in business. They don't seem to care where or what you got, as long as you have that diploma. Having it makes you better than people who don't regardless of your actual qualifications (at least, to HR departments), but it doesn't mean you'll get work.

The thing is, a liberal arts college education has nothing to do with finding work. That is not the purpose and intent of a college education. Its not to get you a job, its to help you be a better, more rounded and educated person. The proper college education is about giving you the tools to understand the world better, engage it more properly, act more wisely, and become a better citizen and leader in your community. You learn how to think, how to understand what you see and hear, how to react, and the foundation for thinking about everything that takes place, in theory.

And that is why modern colleges and universities are such trash. It isn't that they fail at getting people jobs, that's largely irrelevant to the point of a liberal arts education. They fail at preparing you for the world and teaching you to think. With the 60's revolution, colleges abandoned understanding the world and thinking freely and embraced careful indoctrination in leftist ideology, political correctness, and molding young minds to abandon tradition and the past. 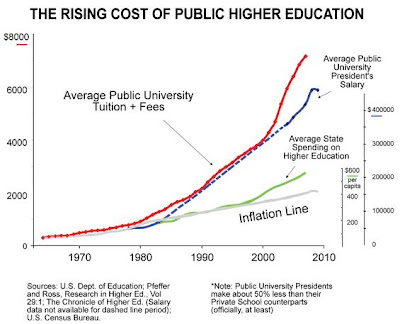 And in the process, the cost of education has skyrocketed. At the Mises Education Blog, we rea d:

In June of last year, total student-loan debt exceeded total credit-card debt outstanding for the first time, totaling more than $900 billion.All of this credit has pushed the average cost of tuition up 440 percent in the last 25 years, more than four times the rate of inflation.

The cost of a college education has gone up more than four times faster than the average cost of everything else. Why? David Hogberg at Investor's Business Daily helps explain:

Over a 20-year period, the growth in administrative personnel at institutions of higher education has outpaced the growth in both faculty and student enrollment.
...
An IBD analysis of data from the National Center for Education Statistics shows that from 1989-2009 the number of administrative personnel at four- and two-year institutions grew 84%, from about 543,000 to over 1 million.

You're paying for more administration, for one thing. They keep adding more chiefs and people in charge, more deans, more folks to oversee behavior. Not educators, not assistants, not janitors, but bosses.

Part of the reason for this is increased government interference, with regulations requiring continual reports on compliance and the college's behavior. Part of it is administration thinking they need bigger staffs. Part of it is the colleges wanting to have a new office and staff to oversee yet another aspect of political correctness and splinters of their different portions of student body.

The truth is, these bodies are spending less on actual education than ever before, and costing more in the process. Robin Wilson at the Chronicle of Higher Education writes:

While universities routinely maintain that it costs them more to educate students than what students pay, a new report says exactly the opposite is true.
...
The report's authors used data from the U.S. Education Department's Integrated Postsecondary Education Data System, or Ipeds, to conclude that more than half of students attend institutions that take in more per student in tuition payments than what it actually costs them to deliver an education.

The chief reason universities inflate the figures on what they spend to educate students, says the report, is that institutions include all of their spending—whether it is directly related to instruction or not—when calculating what it costs them to provide an education. In reality, says the report, depending on the type of institution, it can cost universities much less to educate students than what the institutions bring in through tuition charges.

In the process, colleges and universities are moving away from classical education, proven important to understanding the world and forming a mature, intellectual, and productive mind, and more toward specialty boutique studies and especially leftist interest areas.

All those dead white men are so old fashioned and what they taught and understood gets in the way of what modern academic leftist radicals want to be true; so lets ignore them. If a black professor teaches that the white devil stole airplane technology from Egypt thousands of years ago, well that's his truth and we cannot violate his cultural narrative by pointing out that's an insane lie.

Parents and students have been assured that their life will be better off if they just get an education, particularly a college education. Especially the poorer people in America beleive that the key to success and getting out of poverty is education (rich people believe it is hard work, incidentally). But that's not only a mistaken understanding of the purpose of education - which is a reward in and of its self - but it leads to serious problems with the structure and cost of colleges.

Having created an artificial perception of the value and purpose of college educations, the costs kept going up and up while the reality of what you gain went down and down. Most people these days are calling this the "University Bubble" or something similar: a grossly overvalued sector of the economy which will one day explode. Some are saying that is happening already.

Meanwhile, worried about losing students or looking like they have poor results, colleges tend to inflate grades to make up for lowered admissions standards just to make sure they get the proper mix of ethnic identities to fit some quota they've devised. Students are taught leftist cant and strongly discouraged from disagreeing, and speech codes demolish any sense of liberty and free speech.

You don't get a quality education, the costs are skyrocketing, and the results are awful. I can't think of any good reason to send your kid to college, unless they want a job that specifically requires a certain degree.

Whether these institutions can be rescued or not is questionable, or if anything can take their place. This is yet another area the radical left has all but destroyed through their corrosive ideology, and we're all paying the price.
Posted by Christopher R Taylor at 11:31 AM

The other issue is that there is (or perhaps was - now) a huge pool of funds. Pell grants, scholarship guarantees, scholarship funds, state training/retraining, the various and sundry veterans' education benefits, etc. Hence the college industry can get away with charging more.

It's like the reason banks get robbed" because that's where the money is.

That has to be a factor, yeah. The constant push for more college funding so everyone can get a college education is just making it easier for these institutions to raise spending with the flood of cash.