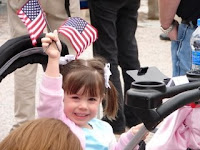 You might have noticed that the airwaves are blistering with some of the most astounding, hateful attacks on the Tea Party Movement so far. First the left ignored the Tea party figuring it was meaningless. Then they called the movement by crass, homosexual references, called it a bunch of old white people, and mocked it as being amateurish for not having specially printed signs by International A.N.S.W.E.R.. Then they went into full attack mode, calling it racist, faking racist events, and even physically assaulting Tea Party members.

“They want to destroy your rights.”
-Nancy Pelosi

“…could potentially put us towards a depression because House Republicans…are unwilling to compromise.”
-White House Comm. Director Dan Pfeiffer

“If sane Republicans do not stand up to this Hezbollah faction in their midst, the Tea Party will take the G.O.P. on a suicide mission.”
NYT Columnist Thomas Friedman

“They want to shoot every bullet they have at the president.”
-Representative Steny Hoyer

“Osama bin Laden, if he were still alive, could not have come up with a more clever strategy for strangling our nation.”
-Joe Klein

“It’s a form of economic terrorism…These Tea Party guys are like strapped with dynamite standing in the middle of Times Square at rush hour saying either you do it my way or we’re going to blow you up, ourselves up, and the whole country with us.”
-Steve Rattner on MSNBC

“They want to repeal the 20th century. They want to smash down every American institution our grandparents fought for…”
-Communist truther Van Jones

“We now have a group of U.S. politicians seeking political purity, who seem to have much in common with the Taliban.”
-Martin Frost at Politico

“they’ve strapped explosives to the Capitol and they think they are immune from it.”
-Margaret Carlson at Bloomberg News

“It’s just an extraordinary act of hostage taking on the part of the Tea Party. It is holding the country hostage…”
-Fareed Zakaria on CNN

And a few headlines for good measure:

...and so on. What on earth has driven these leftists so crazy? Why are the lashing out like a trapped animal? What happened to their calls for civility, calm discourse, and a lack of violent imagery just a few months ago in the wake of the Arizona shooting?
Well there are several reasons, but the core of their anger and fear is that the Tea Party Movement managed to actually elect representatives that had some backbone and kept their promises. Last November was a disaster for the Democrats, but they figured it would all be okay because they've dealt with Republican victories before. All they had to do before was make the GOP look bad in the press, stand firm, and the Republicans would crumble. So they were unhappy but not terribly upset at the reversal, after all that happens often in off-term elections for the president's party.

Except this time, it didn't work. Instead of listening to deals behind closed doors, caving in to media pressure, and giving in to the Democrats for private concessions, these new congressmen stood firm and said "I wasn't elected to do that, I was elected to reverse your madness and shrink the government."

This was when it finally sank in to the left that they didn't have the usual batch of Republicans in office. An NBC Nightly News broadcast shows this very clearly, in an exchange between Andrea Mitchell and Brian Williams (courtesy Ace of Spades HQ):

There has always been anger and animus in among leaders and among the followers - the rank and file, the caucus. But these new members really are willing to tear the place down. And they not only don't care whether or not are re-elected - they don't want pork (laughs). There are no inducements to get them to follow the speaker or the other leaders. So they don't want the traditional methods of buying loyalty here and that was a reform that now has changed the dynamic.

Get that? She's astounded that these new congressmen cannot be bought off for pork. How could they?? They simply won't go along using the traditional methods, and that's simply outrageous. They won't play along, they won't do what they're told, they want to do what they said they'd do when elected. How unreasonable! 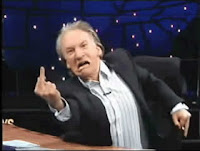 See, for the Democrats, they've worked a long time very hard to get us to the point where the federal government is basically in charge of everything. They had it all planned out: spend like crazy, stimulate the economy, see a big recovery led by "green jobs," save the auto industry, then when in monstrous debt, raise taxes. It was all going so beautifully, until these @#(*!^$ tea party candidates showed up and refused to go along.

With a big tax increase, the Democrats would win in two ways: first, they'd establish a precedent of continuously increasing the government by gigantic amounts indefinitely - permanently imposing the present spending levels, then raising them as time went on - while punishing achievers and redistributing wealth... and they would destroy the GOP. If the Republicans gave in on a tax increase, the Tea Party would have immediately turned on them and obliterated their chances of any gains or even holding seats in 2012. It would have demolished the Republican Party for a long time to come.

Which is just win/win for leftist Democrats. And then the Tea Party candidates ruined it all. They're throwing a tantrum because they lost everything they were working on. Now the momentum is toward cutting spending and reducing the government. Now the momentum is against President Obama, who looks about as likely to win reelection in 2012 as Carter in 1980. According to polling, almost 50% of the country claims to be conservative, while 20% claims to be liberal. Now you know that I think polling is largely trash and that people will self identify toward whatever popular movement has momentum to be part of the crowd, but they take polling as the word of God on high in Washington DC.

Democrats had it all, a supermajority in both houses, a hard left radical in the presidency, they were going to fix everything and finally, with enough power, do all the stuff that should have been done before, and it would all be wonderful and skittles and rainbows. Reality has been a harsh mistress to the left. Things get worse almost daily and their schemes look idiotic to the American people.

When your entire worldview is that power and the immediate is all that matters because there is no afterlife or great beyond, then losing in politics is like finding Jesus' bones: its all a lie that destroys your entire woldview. For the left, political power to implement their schemes is the end all and be all of reality other than personal pleasure and health. That's their heaven, that's their nirvana. Winning enough power to fix everything with their cunning plans is what they live for. Now we can finally fix it all, it will be utopia, like it always should have been if only people had listened to me. 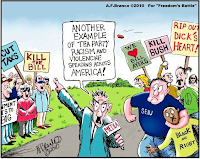 The problem for the left is that their ideas aren't terribly popular, they aren't terribly realistic, and they don't work terribly well when tried. Further, their worldview of the government as noble, hard working proletariats for the people, laboring to make life better with selfless idealism is not shared by the bulk of the population.

Walter Russel Meade tried recently to explain this to leftists in a column about Democrat Pollster Stanley Greenberg's confusion about the American people:

Greenberg has not yet come to grips with the deepest and most difficult aspect of the crisis of liberal legitimacy. He roots the dangerous and corrupting special interests outside the state: with their money and their lobbying the corporations and the fat cats influence and pervert the state. But the state and its servants do not, in Greenberg’s story, constitute a special interest of their own.

This is not how voters see it. For large numbers of voters the professional classes who staff the bureaucracies, foundations and policy institutes in and around government are themselves a special interest. It is not that evil plutocrats control innocent bureaucrats; many voters believe that the progressive administrative class is a social order that has its own special interests. Bureaucrats, think these voters, are like oil companies and Enron executives: they act only to protect their turf and fatten their purses.

The problem goes even deeper than hostility toward perceived featherbedding and life tenure for government workers. The professionals and administrators who make up the progressive state are seen as a hostile power with an agenda of their own that they seek to impose on the nation.

We don't trust people in government any more than we do big corporate CEOs. Flying in Air Force One looks a lot to us like flying in a private jet for Citibank. Taking kickbacks and working with your big business cronies just confirms what we figured about you.

We don't like endless expansions of government power, we don't trust government to know best about our lives, we don't want more regulations, more laws, more intrusion, and more nanny state "for our own good."

The truth is, the Tea Party Movement is more American than 100 ACORNs. The movement of ordinary people saying "look, enough already" is a part of the core of the American people, who may like goodies but don't like the price we're paying for them. The federal government has long been bigger than most Americans have preferred, at least the ones who work and have families and produce. The folks paying taxes and driving the economy and culture do not like what they've seen.

And this was a major miscalculation by the Democrats, as I've written about in the past. They thought America loved them and their leftist extreme ideas in 2006 and 2008. They were wrong: America was sick of the Republican overspending, overextending the government, arrogance, and not listening to the voters. So what did the Democrats do when they got into power? Became even more arrogant, insulting the voters, expanding the government even more and spending even more. Finally the ordinary voter said "I've had enough, it didn't work to throw the GOP out of office, here's where I draw the line"

And out came the tricorn hats, the Gadsden flags, the hand-made signs, and the grim determination to change it all. And that drives the left berserk.

For more examples of insane leftist reaction to congressmen daring to not simply go along with what they were ordered to by Democrats, here are two links

I agree with pretty much everything you say here. However, I do have one bone to pick: the recent so-called "deal" does not, in fact, cut spending. All it does is slightly slow down the rate of increase in the spending. So in that regard the Republicans have not satisfied their constituents' wishes. But it gets worse: as is all too typical, the increase in the debt ceiling goes into effect immediately, while the light tap on the spending brakes will occur in the future sometime, honest, we really mean it. So in that regard the Republicans have let down their constituents even more.

It is brutal, seeing all those quotes together. Good analysis. I've linked to you: "Tea Hatred": The Left's Reaction When Faced With Honest Politicians