Tell St. Peter at the Golden Gate
That you hate to make him wait
But you just gotta have another cigarette 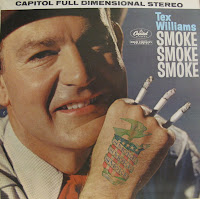 Tex Williams has a lot of great old songs, mostly cowboy stuff, but this is one I'd not heard until recently. Its only got one odd bit in it from a modern perspective (this was recorded in 1947) when he figures that cigarettes won't harm your health. I can't work out why on earth anyone would think that deliberately sucking burning material into your lungs could be harmless but that's how people can be about popular cultural ideas.

The song is about how annoying smokers are. This isn't about second hand smoke or cancer or the stench of burnt tobacco in your clothes, or even how nasty old ashtrays smell. Its about the addiction compelling people to stop pretty much everything just to go get a cigarette. Businesses which will never give anyone any extra time off and dock you for going to the bathroom will let people take a few minutes off every couple hours to smoke without blinking. People will stop doing just about anything to step outside for a cigarette, particularly as these days you can hardly smoke inside anywhere (or outside in many places).

I get that this is a physical compulsion its just often rude and from a non smoker's perspective very annoying. These days smoking is significantly less common than it was in the 40's, when men came home from the war puffing away on the free cigs they got while at war, and women were smoking as well. It was iconic: a tough guy smoked. Cowboys smoked (actually they tended to smoke cigars, considering cigarettes effeminate or something only Mexicans used) in the movies, private eyes smoked in books, they were everywhere.

Today only a few adults smoke and for some bizarre reason lots of teenagers. Why they pick it up I'm not exactly sure, unless its some pathetic outworking of rebellion: you say I can't buy them? Then I want a carton!

In any case, this is an old time country song about a timeless annoyance.

Smoke, smoke, smoke that cigarette
Puff, puff, puff and if you smoke yourself to death
Tell St. Peter at the Golden Gate
That you hate to make him wait
But you just gotta have another cigarette

Now he'd raise me and I'd raise him
I sweated blood, gotta sink or swim
He finally called and didn't even raise the bet

So I said "aces full Pops how 'bout you?"
He said "I'll tell you in a minute or two
But right now, I gotta have me a cigarette"

Smoke, smoke, smoke that cigarette
Puff, puff, puff and if you smoke yourself to death
Tell St. Peter at the Golden Gate
That you hates to make him wait
But you just gotta have another cigarette

The other night I had a date
With the cutest little girl in the United States
A high-bred, uptown, fancy little dame

But I give her a kiss and a little squeeze
And she said, "ah, Marty, excuse me please
I just gotta have me another, cigarette"

And she said, smoke, smoke, smoke that cigarette
Puff, puff, puff and if you smoke yourself to death
Tell St. Peter at the Golden Gate
That you hate to make him wait
But you just gotta have another cigarette.


This is part of the Songs I Like series
Posted by Christopher R Taylor at 8:28 AM

I remember hearing and enjoying that song when I was a teen (I'm 52 now). But I heard the Commander Cody and His Lost Planet Airmen version. I never bothered to follow it back to its source.

Thanks for the info and the side trip into nostalgia.

Now, see the Commander Cody I know is Hot Rod Lincoln, like most people :)