SONGS I LIKE: Rime of the Ancient Mariner (Iron Maiden)

The albatross begins with its vengeance
A terrible curse a thirst has begun
His shipmates blame bad luck on the mariner
About his neck, the dead bird is hung. 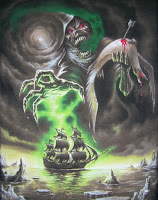 Heavy Metal is often mocked for its shallow stupid music and posing musicians. The movie This Is Spinal Tap did a good job showing what too much of this music can be like; pretentious, absurd, and idiotic. The documentary Decline of Western Civilization pt II shocked people with its frank portrayal of metal life, particularly the self destructive horror of Chris Holmes from WASP.

Yet at the same time, heavy metal can have some of the most intelligent, interesting, and learned songs in rock and roll. From Metallica's One to Queensryche's "Operation MindCrime," metal covers a broad range of subjects other than Satan, chicks, and motorcycles. Even mindless bands like Motley Crue had songs like Dr Feelgood. And Iron Maiden returned again and again to literary and interesting topics such as the myth of Icarus, fear, and this song.

Samuel Taylor Coleridge wrote a poem in 1798 about sailing ships and the men in them which became a classic very rapidly and affected our language significantly. Called Rime of the Ancient Mariner, it told the tale of a man who was cursed and the horror that curse wrought on not only his life but those around him. The poem is packed with symbols and imagery that many know but few recognize the origin of these days. An albatross hung around the neck, "water water everywhere but not a drop to drink," and so on are all from this poem.

The poem tells the tale of a wedding party which is rudely interrupted by a crazed, bearded old man who tells a frightening tale. A sailor he was, on a ship in fog and ice near the shore and all hands feared loss. They spotted an albatross, considered good luck, but the mariner shot it dead out of a demented thought it was their tormenter.

Cursed by the death of the albatross, the mariner's woes take down the entire ship. They are becalmed in deep blue, run out of water, run out of food, and one by one the ship's crew dies, but death does not take the mariner. The idea of a "Jonah" aboard a ship was common, particularly in those days - a man cursing the ship with bad luck (see Master and Commander: Far Side of the World for an example of this legend). The mariner continues having misery until one day finally he meets a holy hermit who removes the curse and he finally is free of it.

The wedding guests are shocked by this story, but the mariner tells them of its moral:

Farewell, farewell! but this I tell
To thee, thou Wedding-Guest!
He prayeth well, who loveth well
Both man and bird and beast.

He prayeth best, who loveth best
All things both great and small;
For the dear God who loveth us,
He made and loveth all."

And Iron Maiden decided to turn this into a thrashing heavy metal epic ten minutes long. They retained many of the lines, and told a pared down version of the tale with several movements of different musical styles, all driven by Bruce Dickinson's distinct voice and the talented musicians of the band. Mock heavy metal if you will - and much of it richly deserves mockery - but among the hair bands and posing death metal fools are gems that will astonish you.

Hear the rime of the ancient mariner
See his eye as he stops one of three
Mesmerises one of the wedding guests
Stay here and listen to the nightmares of the sea.

And the music plays on, as the bride passes by
Caught by his spell and the mariner tells his tale.

Driven south to the land of the snow and ice
To a place where nobody's been
Through the snow fog flies on the albatross
Hailed in God's name, hoping good luck it brings.

And the ship sails on, back to the North
Through the fog and ice and the albatross follows on.

The mariner kills the bird of good omen
His shipmates cry against what he's done
But when the fog clears, they justify him
And make themselves a part of the crime.

The albatross begins with its vengeance
A terrible curse a thirst has begun
His shipmates blame bad luck on the mariner
About his neck, the dead bird is hung.

There calls the mariner
There comes a ship over the line
But how can she sail with no wind in her sails and no tide.

See...onward she comes
Onward she nears out of the sun
See, she has no crew
She has no life, wait but there's two.

Death and she Life in Death,
They throw their dice for the crew
She wins the mariner and he belongs to her now.
Then...crew one by one
they drop down dead, two hundred men
She...she, Life in Death.
She lets him live, her chosen one.

"One after one by the star dogged moon,
too quick for groan or sigh
each turned his face with a ghastly pang
and cursed me with his eye
four times fifty living men
(and I heard nor sigh nor groan)
with heavy thump, a lifeless lump,
they dropped down one by one."

The curse it lives on in their eyes
The mariner he wished he'd die
Along with the sea creatures
But they lived on, so did he.

And by the light of the moon
He prays for their beauty not doom
With heart he blesses them
God's creatures all of them too.

Then the spell starts to break
The albatross falls from his neck
Sinks down like lead into the sea
Then down in falls comes the rain.

And revenge is still sought, penance starts again
Cast into a trance and the nightmare carries on.

Now the curse is finally lifted
And the mariner sights his home
spirits go from the long dead bodies
Form their own light and the mariner's left alone.

And then a boat came sailing towards him
It was a joy he could not believe
The pilot's boat, his son and the hermit,
Penance of life will fall onto him.

And the ship it sinks like lead into the sea
And the hermit shrieves the mariner of his sins.

The mariner's bound to tell of his story
To tell this tale wherever he goes
To teach God's word by his own example
That we must love all things that God made.

And the wedding guest's a sad and wiser man
And the tale goes on and on and on.

This is part of the Songs I Like series.
Posted by Christopher R Taylor at 7:48 AM

Check the embed coding on the first vid.

Thanks, I have to resize the vids to fit them in the squoze down text column and I got an extra digit in there :/

If I had the time and inclination I'd make the text area fatter and add a third column to the template but I have neither.