SEND A GUN TO ENGLAND

Yet senior BBC presenters and reporters on the ground yesterday continued to describe those behind the violence as “protesters”.

From Instapundit, we get this flyer from 1940, about helping the British during their assault by the Nazis. 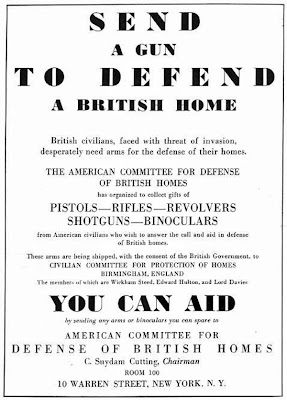 Today, if it were possible, this would be a big help too, as England burns. The riots started in London where the "youths" were amazingly tanned and dusky hued for British folk, but spread to other cities and communities rapidly. One of the main reasons for the spread was the lack of action by the British police - inaction most say is due to specific orders and a culture of Political Correctness in the British law enforcement community.

This attitude led other "youths" to decide they could loot and burn and smash all they wanted; no one would stop them. Now they can loot all the stuff they always wanted to get and throw a tantrum because the government cannot keep paying out lavish benefits forever. They say this is about rich versus poor but the people rioting don't say so. These "youths" are angry that the free lunch might be curtailed slightly and always willing to tear things up to begin with. They frame it in terms of "we're sticking it to the man" while burning down their own communities and the places they could have found work.

Tim Blair has a rundown of events in England such as these:
Yet in Enfield, a group did fight back, and forced the rioters away.

The roots of these appalling events are many and tangled, but for the moment let’s just focus on one: the way Britain’s educational establishment has cringed helplessly in the face of a gang culture that rejects every tenet of liberal society. It’s violent, it’s sexist, it’s homophobic and it’s racist. But it is broadly tolerated by many people in the black community, which has lost contrhttp://www.blogger.com/img/blank.gifol of its teenage youths. Those youths scare the wits out of teachers and social workers – and some police officers, too. The threat of physical violence is ever present in many schools, and one can hardly blame individual teachers for recoiling from it.

But we should and must blame those schools and education authorities that have made extra space for gang culture in children’s lives because they believe it is an authentic expression of Afro-Caribbean and Asian identity. We are seeing a lot of black faces on our screens tonight; it’s a shame that the spotlight can’t also fall on those white multiculturalists who made this outrage possible.

So sensitive to culture and minority feelings, British leftist multiculturalism has been shot through the entire system so thoroughly that the end results were inevitable. You can't criticize another culture or that's racist, you can't try to teach better ethics and behavior, or you're crushing their cultural identity and murdering their heritage. You can't stop young people from becoming brutes out of the Lord of the Flies because that would be judgmental and smack of right-wing politics. Who are we to say our culture is better?

And eventually, inevitably, this is what we see. People so degraded and corrupted by a lack of anyone trying to lift them up and help them find a better way that the entire society starts to collapse. Small wonder these people support the palestinians, they think that's how young people should act. The racism of low expectations is strong in these people; they act like they don't think these young people can be any better.

All that is necessary for evil to triumph is for good men to stand aside. And that's exactly what Multiculturalism has done to England and much of Europe. These are the seeds they sowed.
Posted by Christopher R Taylor at 8:03 AM

Back in the Dark Days, Americans sent 25,000 guns and 2,000,000 rounds of ammunition to the Home Guard. After the war, these guns were rounded up and destroyed. Screw 'em