The left loves to put the blame for the debt on President Bush, claiming that it was military cost which created the vast overspending. Two unfunded wars with tax cuts! They cry, now, having abandoned the idiotic "illegal" line. That its one war eludes their glassy-eyed zealotry. That no wars have ever been funded while being fought is irrelevant to their dogma. That the tax cuts increased revenues doesn't matter a bit to them. They have a Democrat to protect and a Republican to attack.

The problem is, President Obama hasn't cut back the military spending, he's increased it. And the other spending? Well, take a look at this chart from Gateway Pundit: 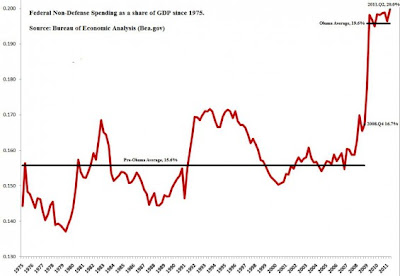 Unlike Michael "Piltdown" Mann's discredited and nonsensical hockey stick graph, this one is what actually happened. That's non-military spending in the US over the last 36 years, since 1975. That spike at the end isn't a computer projection or speculation based on modeling, it is what actually took place.

Now I have to give President Bush an assist here: he signed TARP into law. But TARP only covers a part of that spending. And with the vast costs of the Government Health Insurance Takeover act on the way, you can be certain that upward spike will continue unabated.
Posted by Christopher R Taylor at 7:51 AM

My only problem with this chart is that it shows spending as a % of GDP, which doesn't give a truly accurate account when you are talking about "big spending". During a booming economy w/ a relatively high GDP, a government could be spending massive amounts, and this graph would show them as being a "lower spender" than a government spending less money (but a higher % of GDP) during a recession.

The best chart to discuss these issues would be one that shows real dollars spent, perhaps adjusted for inflation. Obama would still perform miserably, but the "hockey stick" probably wouldn't be as dramatic compared to Bush (who also performed miserably on spending, even when you remove defense spending from the equation).

I agree President Bush did a lousy job with spending, but since the GDP was better until the last 2 years or so, I don't know if that graph would look much different.