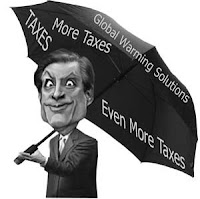 Al Gore went berserk recently. Every month that goes by for several years now seems to have yet another piece of science or news that tears the global warming alarmist theory to pieces. Hysteria paid so well for a while there, and it got Al Gore several major awards for running around being a living example of everything he preached against.

Several English kids went on a school trip to Norway to study the effects of climate change. One of them, a boy from Eton, was attacked by a polar bear and killed; the bear was shot dead. Looking for proof that global warming was endangering the polar bear ended up with a child dead from the abundant bears in the area. In fact, local experts note that there are more than usual due to an extra cold winter that resulted in more ice floes than usual.

The other traumatized kids were airlifted out for frostbite and sunburns from the glare off the ice and snow. Yet another alarmist expedition ends in misery, cold, and failure.

Tim Flannery, Australia's leading climate hysteric is epic for his repeated, hilarious failed predictions. He predicted drought and Australia got floods. He predicted reservoirs running dry and they ran over. He predicted coastal flooding and bought a house yards from the beach:

Anyone with a coastal view from their bedroom window, or their kitchen window, or whereever, is likely to lose their house as a result of that change, so anywhere, any coastal cities, coastal areas, are in grave danger.

But the very next year he bought a house just four or five metres from the edge of the tidal waters around the Hawkesbury estuary:

According to property searches, in 1997 Professor Flannery bought one house on the Hawkesbury with his wife, Alexandra Leigh Szalay, for $274,000.

Five years later—even as climate scientists, including Professor Flannery, claimed evidence of global warming and rising sea levels was even more solid—the couple bought the property next door, for $505,000.

Flannery admitted there was "no chance of it being inundated, short of a collapse of the Greenland Ice Shelf”

“There’s no longer a shared reality on an issue like climate even though the very existence of our civilization is threatened. People have no idea!

And finally, the US Environmental Protection Agency is demanding that auto manufacturers reduce emissions of their products in America to an average of 163 grams/mile of CO2 in model year 2025.

To help the car companies do so, they are proposing to totally ignore all emissions of any car that has an electric motor to help it drive. Even those from charging a car, which as Jeremy Clarkson loves to point out, are powered by coal-burning plants. This makes it appear that the EPA isn't so much interested in lower emissions as pushing the electric car as much as possible.

It’s no longer acceptable in mixed company, meaning bipartisan company, to use the godd**n word climate. It is not acceptable. They have polluted it to the point where we cannot possibly come to an agreement on it.”

Hey Al, maybe people have a problem with your prophecies of doom and hysterical statements about the climate because... you're wrong. I understand, when the snake oil stops selling so well and people start discussing tar and feathers, that can get you pretty worked up but...
Remember that from last Friday? That's just one week's news.

Oh, and get this, those quotes from Al Gore's hysterical rant? They came from a news story at the Colorado Independent. In a stunning display of objectivity and neutral reporting, the headline for that story is:

Nice job Troy Hooper. Maybe you should look into how much Al Gore's corporations pollute and how much they benefit from hysteria he has generated over the years with his lie- and distortion- filled power point presentation An Inconvenient Truth. A whole generation of kids have been raised on this alarmist cant and its going to take years to wean them off it - especially as teachers have gone out of their way to claim anyone who disagrees, especially parents, are ignorant, uninformed, and bigoted morons.

MS at The Hocky Schtick does a good job of fisking Gore's hypocrisy, lies, and lack of actual evidentiary support for his rant, if you want to take a look. This guy almost won the presidency.

Al Gore isn't the only one, of course. Flannery has had his meltdown and others are becoming increasingly violent in their rhetoric, spewing spittle-flecked threats and profanity like Gore:

In this post, I'm going to argue that the typical strategies are doomed to failure. It may be that the simplest, least clever strategy -- kick their asses -- is still the way to go.
...
For my part, when I see people denying facts and bullying scientists in order perpetuate the dominance of fossil fuel interests that are killing people and threatening my children's futures, I am inclined to tell them to go f**k themselves. That won't resonate with their social/tribal perspectives, but that's because I find their social/tribal perspectives repugnant and worthy of social censure. I want to beat them.

That's from Grist magazine, the publication that invented a quote by Reagan Interior Secretary Watt about the environment and Christ's imminent return.

Maybe if you had been more focused and interested in science and the facts instead of presuppositions and political conclusions, people would listen to you. You had your shot, and you blew it by lying, hiding evidence, distorting the facts, smearing anyone who dared disagree or question you, and abandoning nearly every tenet of good science.
Posted by Christopher R Taylor at 8:46 AM

"I believe it is appropriate to have an over-representation of factual presentations on how dangerous it is..." -Al Gore, 2006

“There’s no longer a shared reality on an issue like climate even though the very existence of our civilization is threatened..." Al Gore, 2011

Sometimes you get what you asked for.