“What purpose does calling someone a ‘pervert’ or ‘predator’ serve anyway, other than to express contempt and hatred?” 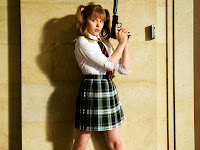 A few weeks ago in a Word Around the Net wrapup related a story of a judge in the UK who seemed suspiciously... understanding of pedophilia:

In the UK a wigged judge told a defendant in a trial that she didn't criticize him “for being a teacher who’s attracted to children. Many teachers are but they keep their urges under control both when it comes to children and when it comes to images of children,” Guess what: I do, that's sick and disgusting. I seriously doubt "many" children are sexually attracted to children but I wonder if this sick judge is. Why do I say so? This isn't her first brush with a pedophile, according to the Telegraph:

In 2008, she allowed former headmaster Phillip Carmichael to walk free from court after accepting that medication for Parkinson’s disease had turned him into a paedophile.

Sentencing a bus driver to ten-months in jail in 2006 for abusing a 12-year-old girl, the judge acknowledged that she felt “obliged” to lock him up because of “current views about sentences”.

“I have a record of trying to suspend sentences in cases like this and them ending up in the Court of Appeal,” she told Robert Prout, following a public outcry over the brevity of prison sentences for sex offenders.

Now we get the news that the American Psychiatric Association is working on a new diagnostic "bible" called the Diagnostic and Statistical Manual of Mental Disorders (DSM). This new one will involve several changes, including the redefinition of pedophilia. John Rossomando at the Daily Caller reports:

The August 17 Baltimore conference is sponsored by B4U-ACT, a group of pro-pedophile mental health professionals and sympathetic activists. According to the conference brochure, the event will examine “ways in which minor-attracted persons [pedophiles] can be involved in the DSM 5 revision process” and how the popular perceptions of pedophiles can be reframed to encourage tolerance.

Researchers from Harvard University, the Johns Hopkins University, the University of Louisville, and the University of Illinois will be among the panelists at the conference.
...
"I would urge all SO [sex offender] activists to listen to their own message: Stop buying into and promoting false stereotypes. Stop demonizing a whole class of people, and start learning the facts.”

Now, whats interesting here is something I and others have long warned about; the steady decline of morality in a culture based on incremental redefinition prompted by ostensible sympathy and kindness:

Berlin has similarly compared society’s reaction to pedophilia to that of homosexuality prior to the landmark 2003 Lawrence v. Texas decision that decriminalized sodomy.

B4U-ACT’s own website puts Berlin’s views front and center. “Just as has been the case historically with homosexuality,” he writes, “society is currently addressing the matter of pedophilia with a balance that is far more heavily weighted on the side of criminal justice solutions than on the side of mental health solutions.”

Well, yes, funny you should bring that up because that's exactly what Justice Scalia warned about and you guys mocked him for it.

The DMA into the 70s considered homosexuality a mental illness - and its not hard to figure out why; homosexual activity is greatly different from the norm and displays many characteristics of other mental illnesses such as feelings of persecution, rejection of societal norms, refusal to consider change, and so on. I would argue that this is not a mental problem, but you can see why it and perversions such as sadomasochism and exhibitionism were considered mental illnesses in the past.

At least, they were until people started to speak of them in terms of oppressed minorities, people who need to be understood, and condemnation of "demonizing" and "stereotypes." Now they're a protected minority and people who are repulsed or find them immoral are attacked and mocked by society.

The same pattern is being followed here:

“Allowing for a form of non-diagnosable minor attraction is exciting, as it creates a sexual or political identity by which activists, scholars and clinicians can better understand Minor Attracted Persons,” Breslow writes in a summary of his upcoming August 17 presentation.

“This understanding may displace the stigma, fear and objection that is naturalized as being attached to Minor Attracted Persons and may alter the terms by which non-normative sexualities are known.

Non normative sexual attraction. "MAP" or Minor-attracted persons. That's so much nicer than sick baby raper. After all, these might be otherwise nice people, productive members of society and who are we to question their love? What kind of h8tful bigot would condemn someone simply because they love someone else?

Think I'm kidding? Here is the immediate response to a report on this at Right Wing News by a leftist commenter:

Pedophilia is not a crime. The crime is sexual abuse of children, and there are undoubtedly people who are sexually attracted to children but don't act on it. We just have no idea how many, because the whole "pedophilia is a crime" attitude tends to encourage them to keeps their mouths shut, lest they be treated like criminals.

Apparently it does take a conference to understand the difference, because that's what this conference seems to be about. Not to "excuse" those who commit crimes against children, but to find ways to reduce the stigma of merely having a sexual attraction to children, so that those who may be tempted to commit crimes in the future can be more effectively identified and treated, as opposed to being forced to live in secrecy.

Its so mean, having a stigma of being a sick bastard scumbag just because you lust after children, how could anyone do that to another person? We must be tolerant we must be understanding. The only people who should have a stigma is a Christian conservative. They're the real sickos.

I've seen this pattern before, because it played out in my life time with homosexuality. Back in the 70s people thought homosexual behavior was not just repugnant and weird but wrong. Now, most people think homosexual behavior (in theory at least) is weird but perfectly acceptable - just not for them. Someone who stands up and says "hey, this is wrong" is shouted down with bitter anger. They are considered sick and horrid for saying such a thing. What was once good is considered bad, what was once evil is considered good.

Did anyone really think this was going to stop? That there would be any limit to how far this slouch goes? Progressivism knows no limits. Ever. Each new step is a bold advance toward progress and greater evolution of human tolerance and understanding, no matter what the cost. What was once horrid is now embraced, step by step.

Because without an absolute, objective system of ethics to designate right and wrong, everything eventually becomes right -- except questioning that principle.

Got a little daughter? Progressivism wants a day to come when she can be molested by some adult and as long as she likes it, you cannot criticize it. You think I'm kidding? Just watch. Or, this time, maybe you might consider not standing by and watching evil have its way. We all have to draw the line somewhere.

Remember: it doesn't matter how high your taxes are if the rest of society is utterly corrupted. The very morality you attack is the only hope we have to keep government from being corrupt, to keep government from growing and attacking your liberties. Without that, there's nothing to stop them. They don't fear your guns, they don't fear your votes, they don't fear your protests, because they know a corrupt society will vote for a corrupt government. They know that a people that is not virtuous will vote for self-interest, personal gain, and be lulled by promises of comfort and ease rather than sacrifice for liberty and make hard choices.
Posted by Christopher R Taylor at 7:44 AM

I think there is a very clear distinction between the relationship between consenting adult homosexuals and the power vacuum that exists between an adult and a child. The wrongness of the act (as opposed to the wierdness of it) is much easier to identify than is homosexuality (where the 'wrongness' is either philosophically nebulous or religiously mandated). The child is clearly a victim, because they can't reasonably be said to have given consent when they live in a world where adults hold almost tyrannical power over them.

And while there are certainly plenty of people in the world willing to justify any action in the name of 'tolerance', I think they'll have a much harder time trying to normalize pedophelia than they did with homosexuality.

Sure, for now, society has decided to define consent and maturity as the dividing line. However, in the past that line has been as low as 13, and as I said, it was OBVIOUS to everyone in the 70s that homosexuality was wrong and destructive to people. Then it became not so obvious, then it became obvious that you're wierd to think differently.

Just watch. By then it will be too late, of course. Then we'll be on to the next corruption.

Society can move the age of consent around, even as low as 13 (I believe today in some states a 13-year-old can marry with parental consent), without embracing pedophelia. We are specifically talking about people who desire sexual activity with prepubescent children. As I stated above, there is a much more solid argument for the wrongness of such activities than there is with homosexuality. The reason homosexuality's wrongness became less obvious is because as fewer people went to church it was, indeed, less obvious. Pedophelia doesn't require a religious mandate in order for most people to work out what is wrong with it. It's fundamentally different from homosexuality in that respect.