"If a patron buys from an artist who needs money, the patron then makes himself equal to the artist; he is building art into the world; he creates."
Ezra Pound 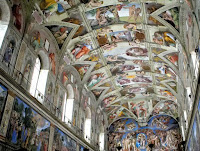 Every time someone comes up with a piece of junk or something deliberately shocking and offensive paid for by the National Endowment for the Arts, the cries to defund the NEA arise again. And the response is always the same: "Who cares if its unconstitutional, we need art in our lives and this makes sure we get it."

The argument is predictable: if we rely only on the market for art, we'll get market-driven art. We get Justin Bieber rather than Led Zeppelin. And there's some merit to this argument. After all, the British Invasion of blues-driven rock in the late 60s was largely driven by state funds which allowed musicians to work on their art rather than a job.

Then again, no one paid Nirvana to take heroin and put out music, and they along with a handful of musicians like Guns 'n' Roses in the late 80s transformed music and re-energized a dulling, increasingly corporate endeavor.

There was a time, however, when art flourished, and when nearly every single great work of art produced was done and there was no taxpayer money involved. That time was the era of patronage.

Patronage worked like this. Let's say you're King Eustace the Oblong and you want other kings an nobility to take you seriously. You went out and got a great young artist and moved them to your palacial grounds, paid for their food and supplies, and bought what they produced. Your pet artist could put out music or poetry or sculpture or other arts all they wanted and their expenses and some money for fun was all paid for. You could command them to produce a piece of art if you wished, but they were largely left on their own.

What they produced on commission you would own, but the rest of the art was just a testament to how enlightened, artistic, sensitive, and wonderful a person you were. Each piece of art they made was partly made by you, because you kept the artist around and paid for them. Without a patron, chances are the art wouldn't be done, so that reflected well on the patron and gave them glory.

Almost every single work of great art produced before 1900 or so was done for a patron. It showed distinction, class, and style to have a great artist around. You could show them off and anyone who loved their art also loved you for it.

It wasn't only kings that did this. The Sistine Chapel roof was done with the Roman Catholic Church as a patron. Rich merchants and wealthy ex soldiers who brought home loot would patronize artists. Operas, books, paintings, stained glass windows, architecture, all of it was done through the patronage system.

And what would revitalize art today is the same thing: a system whereby artists are sustained and driven by private billionaires rather than government tax dollars. Governments are non judgemental. Patrons will demand excellence. Few if any patrons would support or encourage an artist who put out a picture of the virgin mary with elephant dung on it. All that "shock value" art and crap that we are burdened with would fade away if these alleged artists weren't able to suck on the taxpayer teat for their livelihood.

The problem is getting this started. The only reason it started up to begin with was that a few very far-seeing and brilliant nobles and clergy saw the value in supporting the arts. Once that happened, it became fashionable, and everyone wanted an artist in their household. And that's the only way it could start again, for the super rich and culturally influential to start doing it again.

All it would really take is for someone very popular and influential to start it up and others would follow as an effort to seem just as important and significant. President Obama, for instance, had a perfect chance to start just such a thing up. His bumping around in the Hamptons, incredible popularity, and cultural significance in 2009 gave him a perfect opportunity to start up patronage. Of course, he's a hard left academic so he thinks government should do it all, so that wasn't going to happen, but that is the sort of person it would take.

Once the system took off, it would be pretty self-sustaining, with artists being kept by the very wealthy, and promoted by their money and cultural power. And maybe we could get some better art out there, again.

Until then, all we're going to get is trash, part of it subsidized by the government.
Posted by Christopher R Taylor at 9:06 AM