MTV used to have the words "Music Television" on their logo. That's what MTV used to stand for. Now, its more miscellaneous television, and almost never plays any music at all. When MTV started in 1981, all they did was run videos, 24 hours a day, with breif introductions by the "VJ's" such as the cute pixie Martha Quinn and Mark Goodman with his Jew-Fro.

They almost never run videos any more. VH1 was created with the same idea in mind. Then they went to other shows, and launched M2 to show videos... and they don't any more, either. In fact, there aren't any dedicated video channels on TV any longer. Country Music Television shows the most videos of all of them these days, between their country version of Real World (Sweet Home Alabama) and reruns of Dukes of Hazzard. Steve Spears writes in the Tampa Bay Times:

Beginning in 1987, MTV began airing its own game show, Remote Control. Compared with the relative innocence of MTV's earlier years, the show had a decidedly mean streak to it. Contestants were razzed by the likes of Colin Quinn, Adam Sandler and Denis Leary. Losers were buckled into recliners and ejected from the show with all the pomp befitting a drunken bar patron.

It was only the beginning. Videos quietly became scarce. Mopey grunge-rockers from Seattle wanted little to do with the perky airwaves of MTV. Cookie-cutter boy bands ruled concert arenas. Dancing and posing suddenly became more important than singing. Actual music suddenly was as popular as a pet rock.

MTV needed a new niche for a new decade.

In 1992, The Real World — following the hormone-soaked lives of young adults crammed together in a house — began transforming reality TV. It would be the first of more than 70 reality shows to appear on the network. A year later, Beavis and Butt-Head began devolving the world of cartooning. In 2009, a self-proclaimed group of "guidos" and "guidettes" descended upon the Jersey Shore to deliver the wisdom of "smushing" and "GTL." (If you have to ask, just consider yourself lucky for not knowing.)

And in February 2010, MTV formally dropped the words "Music Television" from its logo.

Why this shift? MTV execs and Steve Spears blames social media, You Tube, and MP3 players, but those only developed in the last 10 years at most. MTV abandoned its all video format in the early 90s. So why the change?

Well the owners of MTV noticed that while they got viewers with their all-music format, they got more viewers with their trash shows like Real Life, so they started adding more and more of those shows in. Yes, Real Life was the first "reality" show, thank you MTV. It was cheaper to produce this crud than to pay the rights to show all that music, and they got more eyeballs, and hence more advertising revenue.

So the music dwindled more and more and the miscellaneous stuff became more and more part of the programming. People complained, but it didn't matter: the ratings are what drives television, not complaints. So now instead of VJs, music news, and videos you get Jersey Shore, Teen Mom and The Hard Times of RJ Berger. Instead of world premier videos and live shows, you get My Super 16 and reruns of That 70's Show. Mmmm Mila Kunis.

The weird thing is, they still show top 10 countdowns and most requested videos... even though they almost never actually show videos.

There's still a market out there for music videos. VH1 Classic shows a lot of them in specialty shows like "where are they now" and "top 100 80s one hit wonders with left handed black lead singers who were born on Tuesday." The problem is most modern music is, well, trash, so its tough to get people to really want to watch videos of it. I suspect a retro video channel showing music from all over the ages like a really broad MP3 random mix would do well. Just don't bother showing anything particularly new: does anyone really want to see Friday Morning on TV?

And for fun, I'll leave you with this comparison of Rebecca Black's internet sensation and the Beatles: 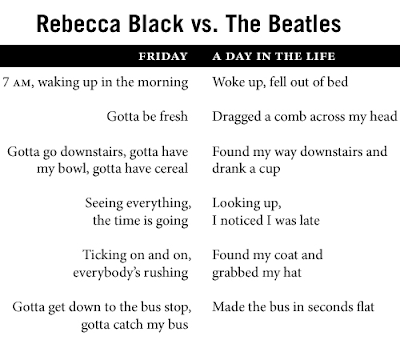 Posted by Christopher R Taylor at 8:46 AM

VH1 Classic has been airing old MTV footage all week to celebrate MTV's 30th year in bidness. I watched a bunch of this last weekend, and was reminded just how much MTV has changed since the early/mid 90's, when I quit watching. What I miss most are the old Dennis Leary and Jimmy The Cab Driver commercials, those were pretty good. The first few seasons of the Real World were actually quite good, and at the time it was a novel concept, but it quickly became formulaic and by the time 'Road Rules' had come around, it signalled the beginning of the end of my enjoyment of MTV.

What makes me feel really old is the fact that MTV is one of the few channels that we have completely removed from our satellite TV "displayed channels" menu. There simply wasn't anything of any remote intellectual or entertainment value on there.