HOW DARE HE CELEBRATE!?

Unfortunately for President Obama, on the day of his 50th Birthday, Standard & Poor announced that the US was being downgraded from an AAA credit risk to AA+. This is basically like someone going from an A+ grade to A-; its not good news but it isn't exactly the US being worthless as an investment.

Now, I've not quite figured out why a handful of small financial companies hold so much power over perception of the world's markets, and I am not sure I trust their judgment, priorities, or agenda, but this isn't great news and it can't have been much for for the Obama family. I didn't send the president a pointless e-card wishing him a happy birthday, but I wish him well. Just because I don't agree with the guy's politics or worldview doesn't mean I hate the guy. He seems fairly likable and if he'd stick to some other job he's good at, like maybe acting, he'd be fine.

The President's 50th birthday party was a big bash, as you'd expect. He's the president after all, the most powerful man in the free world. And its his 50th, usually considered a momentous event. When someone is half a century old, they've gotten somewhere and seen some stuff in life. I don't begrudge him a big party, and I suspect other than the security it was all paid for by friends and family. Good for him.

Which is why I have a problem with this kind of thing: 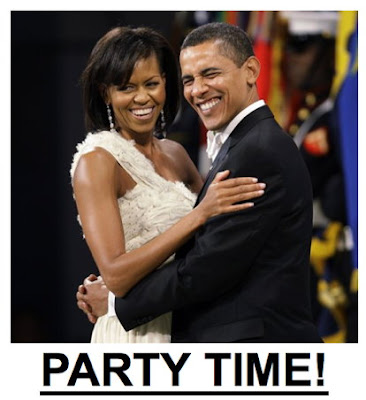 Look, I get that Drudge is basically a scandal sheet, he's after the most lurid and headline-producing news and he loves dirty stories. I get that he's after excitement and hits but really? So if the president had a more humble party the downgrade wouldn't happen? If he called the whole thing off the stock market wouldn't have crumbled? If he sat in sackcloth with ashes crumbled over his head, somehow it wouldn't be so bad?

This kind of partisan sniping isn't based on any genuine, rational complaint, its just "I hate this guy and I want to hit him any way I can." Give it a rest, stop playing for the team and start worrying more about the truth than political enemies.
Posted by Christopher R Taylor at 9:08 AM

Didn't care about the party. The tacky thing was that the birthday was used as a political and political fundraising occasion.

I'd post the "$150 gets you a 'host pack' of birthday hats, buttons, balloons, stickers and signs, all emblazoned with a giant 5-0, 'Happy Birthday,' and the campaign’s official logo", but the barackobama dot com store already cleared the page.