"That health care monstrosity used up all his goodwill and has scared the crap out of voters." 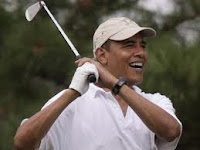 For the record I don't think President Obama should stop golfing or going on vacations. The president isn't ever really on vacation to begin with, the work follows him. And golfing is a couple hours a week out on the links, not some massive waste of time. He's got staffers and media and everyone following him there. If anything happens - like a quake - they let him know and he even made a statement about the quake.

Some mock President Obama for not leaving the golf course when the quake press conference happened, but what exactly would he accomplish by holding it somewhere else? Would him being at the club house make the quake any less of a problem? Would going back to the white house make the people who suffered from it feel any better?

The only problem is that President Obama's continual golfing and vacation trips are hurting his image and his message. People hear him talk about shared sacrifice, tightening the belt, and everyone giving up a little, but see him flying to uber-rich vacation spots and playing a rich man's sport. They think he's unserious about the job and the problems the nation faces and insincere in his statements about all working together on this - and not resting until the job is done.

Three days on a solid black bus visiting a few spots and making a very unhappy-looking statement on camera doesn't make up for all the time spent out having fun in many peoples' eyes, and even his supporters are looking uncomfortable with the man's leisure activities.

So maybe the president would be best served considering giving up some of this time, partying with sports stars and celebrities a bit less on the weekends, and trying a vacation somewhere a bit more humble - and less often - just as a gesture to people who can't party or vacation at all in this economy. It certainly couldn't hurt his image.
Posted by Christopher R Taylor at 8:33 AM

What image? The transformative image of Candidate Obama stating he wished to fundamentally change America.
He did. We're looking more and more like Italy and Greece each day.

The only difference twixt the Parties is how they spell their names. The Donks are Obama Socialists; the Pachys are Socialists Lite.

The elected Elite worry that the Welfare Class will riot. So what, the Middle Class is going to REVOLT.