That squeaking sound at night isn't crickets. Its people scraping the Obama stickers off their bumpers. 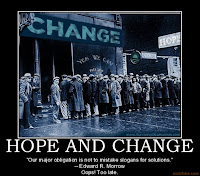 In August 2009 I wrote a piece about how voters were starting to regret having gone with President Obama in 2008. Former Obama supporters and fans were starting to realize not just that he was not a Christ-like figure who glowed with supernatural light and could do no wrong, but that he was a not especially capable man with little experience but vast ego.

Its frustrating to see people finally start to catch on to what we on the right were saying about the man for over a year, warning what he was like. If you voters had only listened a little instead of dismissing our concerns as racist, political, and hateful, maybe we could have avoided 4 years of this idiot - and possibly 4 more. Instead you let the press sway you and ignored the information that the press refused to cover (because you're just a blogger that hates blacks anyway and if it was important CNN would have reported on it and besides, they said that issue was over now). I'd like to believe that voters have learned, but I fear they'll fall into the same idiot trap next election.

After all, who wants to be responsible for throwing the first black president out of office? Never mind that he's every bit as white as he is black, never mind how awful a job he's doing, the press makes those other guys seem stupid and crazy and didn't I hear some one say the Tea Party caused the economic collapse?

We'll see but I'm not exactly optimistic here. That's why when I read more people uttering regrets at having voted for President Obama I'm not encouraged. Sure, the New York Times ran a big piece complaining that President Obama is massively different from Candidate Obama. They were stupid enough to beleive the vague campaign promises would somehow translate into super president who could command congress and do everything right. They were gullible enough to think a hard core Alinskyite leftist friend of Bill Ayers radical would be a transformative influence in politics, ridding us of corruption, collusion, and cronies.

Indeed, Drew Westen actually condemns President Obama for not being sufficiently leftist, for not spending enough money we don't have, for having too small a "stimulus package." They complain that his rhetoric attacking capitalism and small government was just rhetoric, and he didn't push for even more programs and government interference than he did.

Westen's shocking lack of comprehension about how people actually get into debt (hint: he doesn't think it comes from spending too much, he thinks it comes from being friendly to business) is all over this piece. His complaint is that Obama is too moderate, an idiotic and all-too-common leftist complaint these days. Their argument is that since the president didn't implement every single leftist dream idea by imperial fiat, he's not really leftist.

I understand, in a way. What choice do they have? Its either too moderate or their leftist ideas are utter failures. Nobody wants to face the idea that their entire worldview is a lie, so the answer is Obama isn't doing enough of what I want. As Victor Davis Hanson puts it:

Partly, the anger is quite savvy: if one suddenly blames Obama the man, rather than Obama the ideologue, then his unpopularity is his own, not liberalism’s. There is a clever effort to raise the dichotomy of the inept Carter and the politically savvy Clinton, but in the most improbable fashion: Clinton supposedly was a success not because he was personable, sometimes compromising, and often centrist, and Carter was a failure not because he was sanctimoniously and stubbornly ideological, but just the opposite: Clinton is now reinvented as the true liberal who succeeded because of his principled leftwing politics; Carter like Obama was a bumbling compromiser and waffler.

Its like the old argument that there are no bad Scotsmen. Why? Because if a man is bad, he's not a true Scotsman. This is the same argument that atheist fundamentalists like Christopher Hitchens use about atheist regimes who turn evil: they were acting as a religion when they did bad, and as an atheist when they did good. Leftists are good and their ideas infallible, therefore if they fail then the people who tried were failures, not the ideology.

So we have people writing pieces like Bill McClellan at the Post-Dispatch who notes he should have voted for Hillary. Why? Because Obama backed down and didn't raise taxes. Or Margery Eagan who says she made a career of bashing Hillary because she loved Obama but now is moving toward Ms Clinton. Why? She has more nads than Obama, she claims. Clinton would stand up to the evil Republican. Clinton would defeat the Tea Party. Clinton would not compromise... wait, wasn't that what they called the Republicans to do?

The fact that Hillary Clinton has proved herself a mediocre senator and a hapless, flailing secretary of state who keeps making very public, very humiliating mistakes doesn't matter. She's the alternative. These are the same people who tried to sell us on John Kerry as the greatest man who ever lived and argued that John Edwards was the right man for the White House as a backup. These are the same people who loved Al Gore in 2000 and wanted Mondale and Dukakis in the 80s.

They're faced with reality conflicting with what they dearly wish to be true. Its happened over and over to them. When that final crunching sound of their face hitting the brick wall finally sinks in, they don't turn away from the bricks, they find a different spot and try again. Because its scary to change your entire worldview, and frankly I'm not sure many of them can. Sometimes what we believe seems to be so hard wired into us that some of us just cannot cannot truly change our minds.

I've seen it happen over and over, in discussions with leftists. They'll finally, with overwhelming evidence and logic, privately concede that yes, what I was arguing is valid. Then, not long after, they'll be exactly back where they started. It takes real courage to change your beliefs, particularly in the face of peer pressure and comfortable old patterns.

That's why in November 2012, when they stand in that ballot box or have 50 absentee ballots in front of them at the ACORN office, they'll go for Obama again. Because it will be him or the Republican, and it doesn't matter who the Republicans run. The GOP could clone Obama and run him on their ticket and they'd still vote for the Democrat.
Posted by Christopher R Taylor at 8:50 AM

"Because it will be him or the Republican, and it doesn't matter who the Republicans run. The GOP could clone Obama and run him on their ticket and they'd still vote for the Democrat."


That works on all facets of the political spectrum and I am not sure that McCain would have left us any better off. Who is going to be the bright shining hope of the Republican ticket? Another former Gov from Texas? Please forgive me if I am skeptical.

I don't know enough about any of the alternate candidates to say much about them, but I do know any one of them would be less business hostile and would not be using the various agencies and elements of the executive branch to implement policies that are so damaging to the economy.

Of course both parties do that but Obama is going to win again because the people who complain now will still line up to vote.