"I fully acknowledge that I could have dealt with these difficult circumstances better, and I remain focused on being a good father to my children and a strong representative for the people of Oregon." 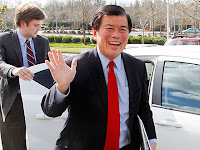 People keep talking about Wu having already resigned; he's still in office and will be for weeks at least. He's not going anywhere until the debt ceiling vote because the Democrats want a reliably leftist warm body in that seat until this big vote is over. He may have announced his resignation, but he hasn't resigned yet. Here's a few samples of Wu's career:
Portland: where it doesn't matter who you are or what you're like, you'll be elected if you're a Democrat. All this crazy behavior and drug use was apparently tolerable, but touch a girl and you're out.

For people who get their news from the legacy media: there's a reason this man is resigning from office. Many of you will be surprised to learn of his announcement, since several major outlets didn't bother covering anything he did before this point.
Posted by Christopher R Taylor at 7:40 AM