“She is great — incredibly full of energy, incredibly intelligent, living the life and just squeezing everything out of it.” 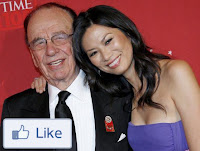 I've not commented on the Murdoch/News of the World story yet because frankly I don't care much and Murdoch is insanely wealthy so he can deal with his own problems. I know the left is stupidly gleeful about Murdoch facing troubles because they despise him so much for daring to defy the mainstream news culture, and because he's behind Fox News, yet at the same time his media empire isn't exactly a zenith of class and dignity either.

I have neither proof nor reasonable basis for the suspicion, but I strongly suspect News of the World's biggest problem is that they got caught hacking into phones rather than that they were unique in the process. Journalism strikes me as such a morally vacuous profession that no depths they plunge to in order to get a story and make a buck off it surprises me. It's not like bigger, more prestigious news organizations haven't been busted doing at least as bad or worse - News of the World wasn't making up stories to print like The New York Times, for example.

But what really interests me about this story is Wendi Deng Murdoch. Wendi is the third wife of octogenarian Rupert Murdoch, and she's a couple years younger than me. Money will do that, get you a hot, younger Asian wife. But being hot isn't really what I like about her, she's also loyal and kicks behind.

Caroline Davies a the Guardian explains why i say this:

The lightning reflexes of Wendi Deng as she sprang from her chair to swing at her husband's attacker and try to smack him in the face with his own foam pie owes as much to her athletic prowess as to her protective instincts toward Murdoch Sr.

The 42-year-old had sat immediately behind her husband as members of the culture, media and sport committee grilled him, occasionally pouring his water and leaning in to whisper encouragements. Until, that was, her Charlie's Angel moment.

The Murdoch father and son were nearing the end of more than two hours of questioning when there was a sudden commotion. A woman's voice could be heard shouting "no, no, no" as the shaving-cream assailant, Jonathan May-Bowles, walked up to Rupert Murdoch, took aim and struck.

Deng lunged while startled police officers were barely off the back foot. While a roomful of male advisers also appeared stunned, she scooped up the paper plate fired at her husband and launched it like a grenade back at May-Bowles, a comedian, with an amazing right hook.

Such was the force of her shot that the foam directed at her husband's face landed on a police officer and on her own blue-painted toes.

Witnesses believed that if it wasn't for that officer she would have continued round the table to finish the man off.

She capped this performance by proceeding to sit on the table in front of her husband, calmly wiping his foam-flecked face.

Now, that's a woman. She reminds me of pioneer women in the old west who'd bake a pie then pick up a shotgun and blast a renegade off his horse. I need to find me a woman like that, who understands dignity is more than sitting and looking pretty and a marriage is more than a contract and half of his stuff when you get a divorce.
Of course, her performance threw a yard-long monkey wrench in the legacy media Murdoch destruction machine, she's become an instant sympathetic character and makes Murdoch seem less an ogre; how could he be this monster if he inspires that kind of loyalty and tenderness? She's likeable and pretty and people admire her for her quick action.

According to Elizabeth Flock at the Washington Post, the pie attack and her quick reaction has changed how people view Murdoch:

In one fell swoop, Murdoch’s wife Wendi Deng stole the attacker’s thunder and became the unlikely heroine of the day, transforming her husband into a sympathetic and vulnerable figure.

“That it came in such unblinking defense of her husband means there must be something worth protecting in him,” NY Magazine’s Daily Intel wrote.

“That’s our Wendi,” said Vanity Fair writer Michael Wolff, not exactly a Murdoch fan. “She is great — incredibly full of energy, incredibly intelligent, living the life and just squeezing everything out of it.”

Just like that, the tide of public opinion had shifted.

The problem for the legacy media is that owning lots of newspapers isn't exactly a crime, or anything unique to Murdoch (the guys who own their papers are similar figures. And expressing a political opinion or tilt that is to the right doesn't make you an evil person, either.

Its hard not to admire Wendi Deng, whose real name is Wendi Deng Murdoch, a fact the press tends to leave off. She understands a lot more about marriage than a lot of modern, successful women.

*UPDATE: No doubt Tim Robbins is working furiously on a movie script as we speak detailing how this was all a carefully orchestrated set up by a shadowy cabal of right wingers.
Posted by Christopher R Taylor at 9:29 AM

Notice how the MSM reacted to the wikileaks that endangered Afghan civilians, to the climate gate leaks and now to the News of the World hacks. Tells you all you need to know.

Just a random thought: Numchuks as a fashion accessory.