"Happy to meet you! I'm Hatsune Miku"
What do you get when you combine cheesy Japanese pop, a voice synthesizer program, cartoons, and a big plastic sheet? Mikunopolis. 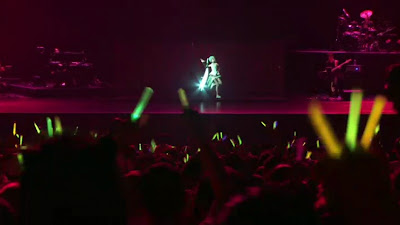 Hatsune Miku is a character created for a product called Vocaloid which is a voice synthesizer for singing. You can input the lyrics and music to a program and manipulate it with several emotional or vocal tones (such as childlike, emotional, happy, etc) to produce music entirely from a computer. The company has put out several different voices, of which Miku was the first and most popular.

Her image has appeared on racing cars, magazines, and advertising around the world. A console video game has been put out involving various Vocaloids including Miku, and she has gotten so popular, the company decided to take her on tour.

What they did was project a carefully rendered 3D animation on a plastic sheet which in the darkness of a concert is effectively invisible, which gives the illusion of the cartoon character coming to life. 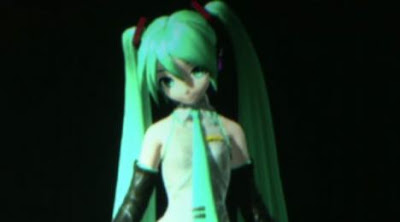 Here's a short animation of part of the concert, other vocaloids were shown but this one is the most popular. They performed songs from a CD produced to help promote the program and make a bit of money on the side.

The actual technology for Vocaloid is fascinating stuff, useful for musicians because it can give them a choir or backup girls for cheap, and since they aren't the main voice if used this way, their slightly autotuned sound is less annoying and possibly not even noticeable if used correctly.

The biggest drawbacks are that the initial cost and the fact that no matter how good you are with the program you won't be as creative and talented as several other singers all are at once. So the sound won't be as fresh and interesting as it could be.

The phenomenon is odd to me, but at least people are having fun.
Posted by Christopher R Taylor at 8:20 AM