"The urgency for taking effective action is almost certainly higher, not lower, than the IPCC reports suggest." 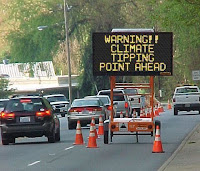 In the Times&Transcript, the very British sounding Norbert Cunningham wrote a piece about global warming and how things are actually worse than people think, but he didn't exactly come across with what he meant to.

Here's what I took out of the piece as the most significant part:

Look at 'tipping points.' Laurence Smith, a professor of geography and earth science at UCLA calls tipping points 'sleeping giants' - "abrupt, show-stopping events." Only recently have scientists discovered that dramatic climate change can occur so rapidly it is akin to flicking a light switch. At some point (nobody knows exactly where or when) natural processes undergoing change will reach a critical mass triggering the switch.

Professor Smith notes that our planet's climate has been relatively stable for the past 10,000 years, during which we became a species of farmers who rely on good climates, but evidence from many sources (ice layers, tree rings, sediments etc.) tell us that before then the planet's climate was wilder with fluctuations as much as an 18 F change in average global temperature in as little as 10 years! Even in our 'stable' period, in the past 1,000 years the western United States suffered three droughts at least as bad as the Dust Bowl of the 1930s, except they lasted between three and seven times longer. Sudden tipping points have occurred before.

Cunningham's point is that we must immediately cripple the world's economy, roll back time to the late 1800s, and turn over all power to a socialist world government body or we're all doomed. Sure, he doesn't say that in so many words, but that's the end result of what he means when he says "Without political and popular will forcing effective action soon, there is but one conclusion: our children, grandchildren and great-grandchildren will be living on an increasingly inhospitable planet. Worst case, it could mean the end of our species ability to survive."

But his entire argument is based around past cases when the entire environment and climate shifted dramatically without human input. These tipping points were entirely unrelated to SUV's, chlorofluorocarbons, and your evil need to stay warm in the winter. These massive shifts in climate were natural and unavoidable - entirely outside the hands of man.

And while I do understand why an atheist postmodernist cannot stand the thought of something being outside their control, most of life is that way, particularly global climate. His whole argument actually suicides when he gets to his key point.

Its interesting, because historically and scientifically he's right, this kind of thing has happened before. Some of the changes have been absolutely horrible, like the ice ages and some have been pretty beneficial such as the Medieval and Roman warm periods which greatly increased agriculture and technological expansion. He's just wrong in his conclusions, which are not based on science and reason but on a presupposition that he never bothers to question. Ironically he starts out by saying "there's no reaching people who dare question me."

He missed a tipping point himself, one that should have moved him into the skeptic column.
Posted by Christopher R Taylor at 7:45 AM