“90 percent of the guns recovered in Mexico come from the United States, many from gun shops that line our shared border.”
-President Obama

OK there's been a lot of talk about Operation Fast and Furious, Operation Gunrunner, and Operation Gunwalker. The problem is, these names are being thrown around as if they are interchangable, and what's worse, evidence about one is being applied to others. For example, President Obama mentioned something about Operation Gunrunner on tape, which is being taken as proof he knew all about the guns to thugs deal for Mexican organized crime.

So here's some clarification.

OPERATION GUNRUNNER: Also called Project Gunrunner. Started in 2005, this was an effort to track guns to see where they went because of complaints that Mexican criminals were getting guns from America. This program started under President Bush and was intended to stop these thugs from getting guns by tracking down their sources. It found that few of the guns used by Mexican gangs actually came from the US.

OPERATION FAST AND FURIOUS: Also known as "Operation Gunwalker," this program was started in 2009 under President Obama as an extension of Gunrunner. Ostensibly meant to track guns more aggressively by supplying weapons to Mexican gangs and tracking their movements, this actually ended up heavily arming thousands of criminals, and only about 600 of the guns are believed to have been recovered. Several US law enforcement officers have died from the use of these guns and there is a congressional investigation into the plan and why it was done, who is to blame, and what one earth they were thinking.

If you're interested in what the Senate has found so far in testimony, there's a pdf file out with the things you're not reading in the legacy media about it. More on that in a moment.

Now, allegedly, Gunrunner was started because of complaints about how many guns were going from the US to Mexico. The claim was that since gun laws are so lax in the US, thugs were driving across the border, picking up heavy weapons, and going back to use them in Mexico. Hence, you hear quotes like Obama's at the top (he's at the high end) or others from many Democrats claiming huge statistics of guns flooding over the border into Mexico.

Gunrunner found that wasn't actually happening but Democrats keep citing those phony statistics anyway. The ATF recently tried to boost numbers of guns that were coming from the US, but the actual data is not very helpful to Obama's case: Out of 29,000 weapons seized in Mexico last year, only 11,000 were even submitted for tracing. Of those 11,000 only 5,000 originated in the US, making the realistic statistic closer to "83% of guns recovered in Mexico do not come from the United States."
When I first heard about Fast and Furious, the cynical part of me thought "I wonder if they did that to make their claims come true?" Because it was part of the standard leftist call for greater gun control: see, they're killing each other in Mexico because of our gun laws!

The more charitable part of me thought "they wouldn't do that." Except... yeah, maybe they would. Mark R. Chait is Assistant Director Field Operations at the Department of Alcohol, Tobacco, and Firearms sent this email to find out about the guns being moved around:

Operation Fast and Furious is looking more and more like a set up from the beginning to push Obama and Holder's radical anti-Second Amendment agenda as they used law abiding gun shop owners to enable government officals to break the law, then turned around and blamed the very same gun shops for illegal gun trafficking, despite those shops being forced by ATF to help ATF agents carry out Operation Fast and Furious, and now, those shops are being punished through new Justice Department gun control measures.

They put the guns out there and are now trying to build cases against the shops that sold these guns, which the ATF made available to sell to track. Its not that I care so much about gun shop owners, I'm sure at least a few of them are bent, or willing to be for the right price. Its that their focus and what they're doing with this program is completely off target.

Chait is claiming that it was his idea to change the strategy and be more aggressive about getting guns moving. He claims it was in 2010 he did this, but Fast&Furious started in 2009, so whatever he did it was after the program already was in place. How far up this goes isn't clear, but so far, we have lots of dead people - including US federal agents - heavy weapons "walked" to Mexican criminal gangs, and a coverup going on at the ATF at the command of Eric Holder.

When people try to testify, they're told not to, and information is being held back by the Obama Justice Department. Leftists try to claim this was a Bush administration idea and conservatives are hypocrites for not opposing it back then. The problem with this argument is that its ignorant at best: Gunrunner was a Bush program, and it had nothing to do with arming criminals. Fast&Furious was an Obama program, and it was all about doing that.

Courtesy Pajamas Media, here's some of the testimony from congressional hearings in that pdf I linked above:

“DOJ and ATF inappropriately and recklessly relied on a 20-year-old ATF Order to allow guns to walk.” The agencies misrepresented the intention of the order to justify their actions.

“Supervisors told the agents to ‘get with the program’ because senior ATF officials had sanctioned the operation.” At least one agent was cautioned that if he didn’t stop complaining about the dangerous nature of the operation, he would find himself out of a job, and lucky to be working in a prison.

“Operation Fast and Furious contributed to the increasing violence and deaths in Mexico. This result was regarded with giddy optimism by ATF supervisors hoping that guns recovered at crime scenes in Mexico would provide the nexus to straw purchasers in Phoenix.” ATF officials were seemingly unconcerned over the deaths of Mexican law enforcement officers, soldiers, and innocent civilians, noting that you had to “scramble a few eggs” to make an omelette, in a callous disregard of human life.

Senior ATF personnel including Acting Director Ken Melson, and senior Department of Justice officials at least up to an assistant attorney general, were well aware of and supported the operation.

Department of Justice officials hid behind semantics to lie and deny that they allowed guns to be walked across the border.

When asked by the Oversight Committee how many of 1,750 specific weapons that “walked” under orders of the ATF and DOJ could have been interdicted if agents were allowed to act as they were trained, the agents answered they could have stopped every single one.

The agents were directly ignored when they sounded warnings, told that innocent civilians might get hurt but the bigger picture was more important, and anyone who complained was told from the top to "get with the program."

Now this might just be incompetence. It could be that they just were so dumb and ignorant that they thought this would work out fine, that they were so smart, so good, and doggonit people like them so much that they could fix everything without anyone getting hurt. Knowing how the left often thinks, that wouldn't surprise me a bit.

But the problem is, the response of the Democrats to this has been totally predictable. They aren't saying "we did nothing wrong, this case is silly" they are saying "this proves we need more gun control." President Obama recently released several executive orders imposing more gun control. These are reporting and registration issues, but they are directly related to the Fast & Furious program.

Its hard to avoid the sense that this was all along intended to do two things:
Having been caught with their hands in the cookie jars, the Obama administration is trying to do it anyway. But this scandal is huge - the only thing that's keeping it from exploding in the face of the Obama team is the incredible reluctance of the legacy media to cover it. It hurts their beloved theme of gun control and hurts the president they're trying to protect while greatly helping their enemies: Anyone not a leftist Democrat.

So while a few stories are trickling out, this isn't getting the standard scandal treatment from the press like, say, Abu Ghraib. Compare the two stories:
versus 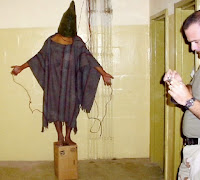 Which of those seems more awful and problematic to you? Which got the greater coverage? You couldn't turn on the news or look at any news source without seeing Abu Ghraib for months at a time, constantly, wall-to-wall. Every pundit, every analyst, every opinion paper was full of the story. With Fast & Furious, a far worse story, we hear crickets.

If journalism was truly impartial and simply after news and justice... this would be front page news and the pressure would be unbearable for the president.

*UPDATE: There's a similar program called Operation Castaway that was started around the same time period under the Obama administration. This one tracks guns they sent to various criminal organizations worldwide instead of just Mexico. The ATF swears its perfectly reasonable and above board but... they said the same thing about Gunwalker.
Posted by Christopher R Taylor at 8:50 AM