"The Dutch sure love to tweet!"
Eric Fisher took data on social media use and mapped it out on a globe using lights to indicate the different kind used. In a way its interesting, because it tells us a lot about who uses what kind.

The different colored lights represent different sorts of social media. Blue is Twitter, Orange is Flickr, and the white are both. I wish he'd added in Facebook, etc but this is something at least.

Here's what the whole world looks like (difficult to see without clicking on to zoom completely): 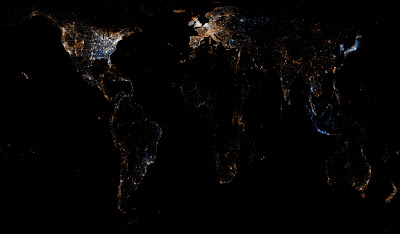 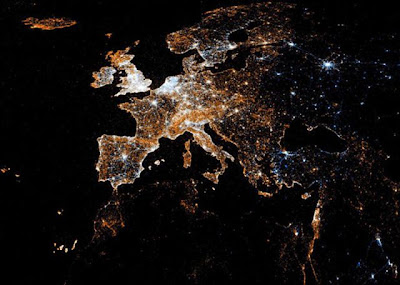 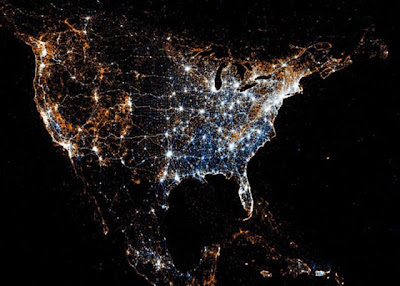 You can see a pattern here: the more urban an area, the more likely they are to use Flickr and Twitter together. The less urban, the more they will use one or the other. Europe is big on Flickr, using it significantly more than the US. Western US uses Flickr more and eastern uses Twitter more.

Zooming in you can see other patterns. Here are some individual cities:
Manchester: 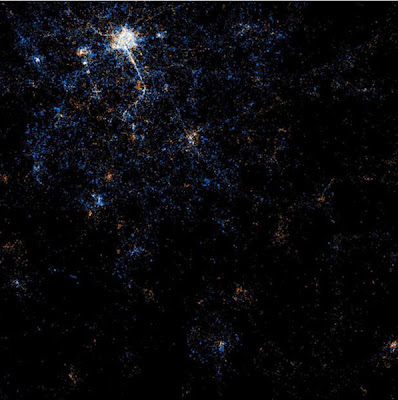 Manchester is pretty light on the social media except in one main area (looks like downtown). What social media they use is mostly twitter with little pockets of flickr uploading. 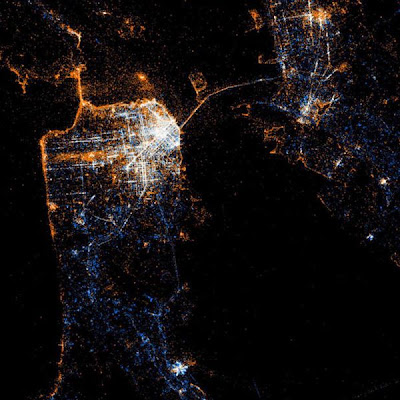 Much more dramatic use of Flickr here, with another downtown focus on both media. There are little pockets of more significant activity, but interestingly the primary use of flickr is on the coast and along the bay. 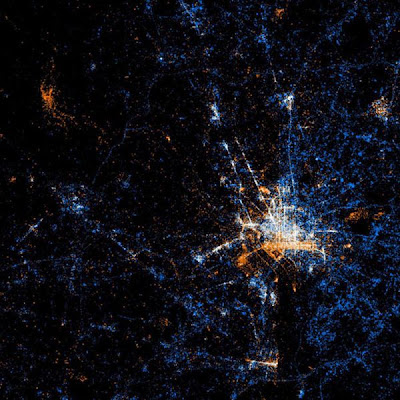 And the pattern continues in DC, with more twitter and small pockets of both; few areas use Flickr. 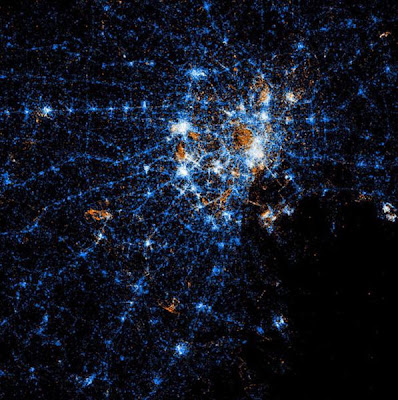 And Tokyo completes the pattern: twitter dominates, with pockets of both and Flickr. Urban areas prefer twitter, while them ore rural you get, the more you see photography uploaded. Downtown in the most densely-populated and wealthy urban areas, you see a lot of both being used. 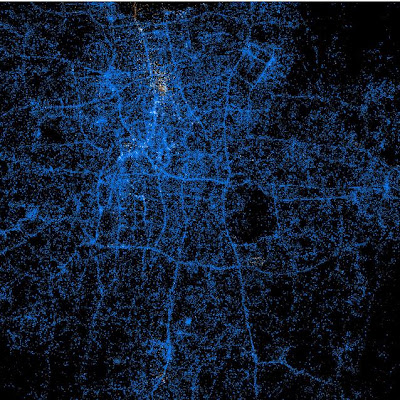 Notice here there's nearly no use of Flickr at all. Only a small pocket in the downtown area uses both and there are a few isolated, small locations of Flickr use. Also notice how clearly lit up all the main roadways are, almost like a roadmap made up of blue dots. That strongly suggests people tweeting in their cars, probably in traffic jams. Were there any maps of China, they'd probably show the same thing: extremely dense populations in traffic jams with phones using twitter. Jakarta is in a third world country, and I suspect all such nations would share pretty similar patterns because they have fewer cameras and less internet access.

Twitter doesn't take much processing power and works well on phones, but images are big and take a lot of bandwidth. If your internet connection is sketchy, slow, and heavily monitored, images are going to be less easy to work with.

Overall the patterns hold pretty well in all the world: people living in urban areas tend to use photography uploads less then text. There's just not that much to show in pictures unless you're that idiot kid from American Beauty that thinks a trash bag in the wind is art. However, when you get downtown in cities, where businesses are run and the apartments cost the most, people are significantly more wealthy and will use Flickr more, again.

I can only guess about why that's true, they likely upload pictures of themselves, parties, business stuff, and artsy pictures of the city, but that's only a guess because I don't have the data in front of me to analyze.
Posted by Christopher R Taylor at 9:11 AM