"You can't handle the truth!!" 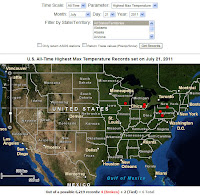 A couple of global warming bits to consider.

The Norwegian shooter stole a great deal of demented environmentalist lefty Ted Kazinsky's (the unabomber) unhinged manifesto and tried to write his own. In it, he attacked global warming alarmists, and this is being held up as proof, proof that skeptics are lunatics and scum: look who they associate with! Here's how to determine the truth of the matter, only a murderous maniac believes the skeptics!

Tom Nelson noted a few other quotes by lunatics that helps put this in perspective:

Osama bin Laden has surprisingly appeared to enter the debate on climate change by blaming industrialised countries for global warming.

Manson said, "Everyone's God and if we don't wake up to that there's going to be no weather because our polar caps are melting because we're doing bad things to the atmosphere… The automobiles and fossil fuels are destroying the atmosphere and we won't have air to breathe.”

Before trailing off, Manson added, 'If we don’t change that as rapidly as I’m speaking to you now, if we don’t put the green back on the planet and put the trees back that we’ve butchered, if we don’t go to war against the problem...'

Truth, right, and reality is not defined by association. Just because, say, Pol Pot loved chocolate doesn't make a love of chocolate evil.

Another bit of news, difficult to relate to since in Oregon its been the coolest summer I remember (its 65 and cloudy outside as I write this, in late July). A heat wave struck the east coast, pushing temperatures far above what I find tolerable. The headlines and pundits' lips were full of three digit numbers and promises of unbelievable heat: 116 in Washington DC! Fry an egg on your porch!

A few records were set, but the main focus was actually the humidity, not exactly new on the eastern seaboard but higher than ordinary. Thus, the temperatures weren't especially high for July in New York or Charleston, but the heat index was higher, a speculated heat level that meteorologists believe the weather feels like based on the humidity and wind.

Thus, when the news touted 123 degrees, they meant "99 actual degrees, plus humidity and wind that results in a heat index of 123." Since no one has kept records of heat indexes, its not sure if that's a record or even particularly unusual, but it was really unpleasant. At the Hockey Schtick, the tale is more clearly stated:

The NOAA database of all-time Max Temperature for the entire US from over 6000 weather stations shows that there were no records broken on July 17, July 18, July 19, or July 20th. A total of 4 stations broke records on July 21, 20 on July 22, and 10 on July 23, 2011, for a grand total of less than 0.4% of stations breaking a temperature record sometime during the past week. More than 99.6% of stations failed to break records sometime over the past week.

July 2 had a lot, but the truth is, in the overall picture it was actually not very many record or even unusual high temperatures. Its summer. The temperature goes up. What's unusual this year isn't the heat index on the east coast, but the unusually cool temperatures on the west coast. San Francisco is chilly. LA isn't sizzling. The fact is, this is where the news is.

The problem is, that doesn't help sell the narrative. Unusually cool sounds like global warming is bunk. Weather doesn't really tell you much either way about overall long-term climate patterns, but it does manipulate public perception of them, and the narrative is all about perception of issues, not the actual issues. Record highs, even if you have to manipulate the report to fabricate them, sells the perception of global climate doom. Record lows tends to damage that. So we get heat indices and thousands of stories on record high temperatures.
Posted by Christopher R Taylor at 10:56 AM