“He’s no common thief, your lordship. He is an exceptional thief.” 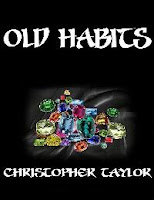 My latest fantasy novel Old Habits is up on Smashwords as well as Amazon.Com now. This extends the formats that the book can be read on to all major popular types for Nook, Kindle and other e-reader platforms.

Old Habits is the story of Stoce, a thief who has grown up on the streets of Farport since childhood alone and surviving on his wits. Hired to steal the Agrandon gems by a crime lord, he loses the gems and finds himself running from assassins sent by the crime lord and rival thieves after the gems.

Pursuing the lost gems, Stoce ends up finding a new partner and sailing to another country where the gems are seized by a local baron and taken to a fortress. No sooner has he broken into the keep than a battle breaks out in the keep, and Stoce ends up facing wizards, guards, soldiers, and a paladin trying to avoid capture, regain the gems, and survive while unraveling a cryptic plot that unfolds around him.

In the end, Stoce may find an even greater treasure, if he can survive.

Old Habits is suitable for teens, adults, and precocious younger kids. If you like fantasy, check it out. At $1.99 its a steal, and you can download previews to the book at either site.
Posted by Christopher R Taylor at 10:56 AM