OF STATES AND MARRIAGE

"You will wear your pink tutu and ruby slippers and you will like it. Bigot." 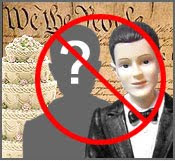 Ace at the AOS HQ has a suggestion. He doesn't like the Defense of Marriage Act (DOMA) and thinks the idea of a constitutional amendment banning gay "marriage" is a bad idea for much of the same reason that I do. Its not that he likes gay "marriage" its that he dislikes adding that to the powers of the federal government.

So like me, Ace has always been opposed to that kind of amendment. So he thought it through and wrote up what he thinks ought to be used instead. Here's the rough text:

1. The laws of marriage shall be enacted into law by the normal and usual legislative process only, or by explicit amendment to a state constitution expressly creating a new law of marriage.

2. Neither this Constitution, nor the constitution of any State, nor the laws of any foreign jurisdiction, shall be construed to require that marriage or the legal incidents thereof be conferred upon any union other than the union of a man and a woman.

3. The law of marriage in one state shall not be construed to create a right to marriage in another state.

What this does is what the DOMA does - states do not have to recognize marriage just because some idiots in another state decided some aberration is actually a marriage, but in a manner that is virtually impossible to throw out or reverse. No court in the land can possibly find one portion of the US constitution... unconstitutional. The only thing that's come close is for courts to say that a state constitutional amendment can violate the federal constitution, which in the case of the California Proposition 8 amendment was absurdly false.

I want this to make it out there and be supported by more people. Its simple, brilliant and would work. And the gay activists would go berserk because they want more than anything to force every state to obey their demands by having one state kneel to their wishes then the full faith & credit act extending it everywhere else. This would easily pass a majority of states, and watching the Democrats in congress try to argue that its wrong would be interesting, since all it does is apply the 10th amendment and state sovereignty to marriage.

Oh, as an aside, Eric commented a while back he didn't think the FFCA would apply to this, but unfortunately he's in error. It would, and will, when the DOMA is overturned or declared unconstitutional. The problem is, marriage is, for the government, contractual in nature, which must be recognized in all the states of the union unless other law prevents it.
Posted by Christopher R Taylor at 9:53 AM