"Not to sound like I’m defending this nut, but I do wonder how many other indiginous Europeans are going to snap as they get squeezed out of their homelands?" 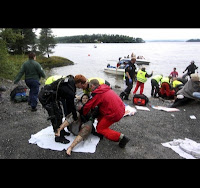 The recent Norwegian slaughter is a terrible, evil tragedy and the person or persons responsible deserve death for their monstrous act. I normally don't post on Saturdays any more because the traffic drops off significantly on weekends anyway, but I wanted to get in front of this one.

Apparently the man that was arrested was a Norwegian (very blond, big, and Nordic looking) despite conflicting rumors after the initial blast and shootings at the camp. His Facebook page supposedly identifies him as right-wing and Christian, and he's stridently anti-multicultural, calling for ethnic and national purity in Norway.

He's also been described as a Freemason, which is greatly at odds with his alleged Christianity. If true, that means he's probably only a Christian in name, as in he identifies with Christianity not in terms of faith and religion but in terms of cultural identity. We'll see, maybe, but the press is not exactly going to cover this fairly and objectively.

Since what this man did is in direct, violent opposition to the teachings of Christianity, since he defies what Jesus Christ teaches, it seems to me that he's either insane or false in his testimony. That won't matter to the left; they have their evil Christian Right Wing terrorist - and I believe he he is a terrorist, using terror methods to change national policy - that they've been looking for decades now, and they'll ride this pony into the ground.

The strange thing is, his opposition to multiculturalism is not exactly poorly grounded. 100% of the rapes in the last two years have been by Muslim immigrants. Muslims are committing acts of violence against Norwegians and their culture. What, exactly, did the government and people of that nation expect, did they really think there would be no violent reaction to permitting this sort of evil in their midst?

What this man did was an atrocity, it was a ghastly act of evil and a sin, but not exactly unexpected, either, if you've been watching the area. I am sure Muslims everwhere are breathing a sigh of relief that finally it wasn't one of theirs who did this, and the Muslim clerics in the country instantly condemned the act, which is good.

Oh, as for why he shot up the camp? It was a socialist breeding ground for children, a sort of multiculturalism indoctrination center. According to Coren's Comment:

The teenagers at the socialist youth camp on the Norwegian island who were victims of terror had just demanded that Israel remove the separation fence – the wall – that has saved any number of innocent, Jewish children from Islamic terror gangs. They also condemned Israel for, well, pretty much everything, and showed no empathy at all for Jewish suffering, and the experience of living with terrorism for more than sixty years. So sad, but so typical.

The kids there had signs reading "Boycott Israel" and so on. This lunatic evil bastard murderer probably doesn't care for Jews or Israel, but that sort of anti-Israel sentiment is absolutely par for the multiculturalism course. They want every culture but Jews, because that's what the new immigrant culture believes, and the whole "oppressor/oppressed European evil" model trashes Israel first.

*UPDATE: There's apparently some confusion and controversy over this man's facebook page; it appears someone added "Christian" and "Conservative" after he was nabbed by the police. That doesn't mean he does not claim to be either, but it does make me wonder what's going on over there.
Posted by Christopher R Taylor at 10:53 AM