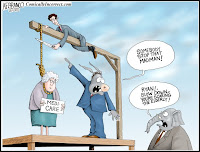 Not long ago I saw an ad on TV from AARP about Medicare. The whole ad was filled with stupid government spending such as shrimp on treadmills and so on, things conservatives have been complaining about for decades, if not longer. But that wasn't the point of the ad.

They weren't complaining about waste in government so much as trying to convince AARP members that Republicans weren't interested in cutting any of this stuff, only Medicare so old people would die and get no medical care. Those evil Republicans.

Except... most of the things they listed we know about because Republican congressmen highlighted them and called for them to be cut. And while Republicans want to find a way to cut back Medicare and rebuild it because it is collapsing, so do Democrats, actually. Robert Pear at the New York Times writes:

In return, Mr. Schumer said, Republicans should be willing to consider some additional revenue.

Negotiators said they were seriously considering cuts in Medicare payments to hospitals for uncollectible patient debt and the training of doctors; steps to eliminate Medicare “overpayments” to nursing homes; a reduction in the federal share of some Medicaid spending; and new restrictions on states’ ability to finance Medicaid by imposing taxes on hospitals and other health care providers.

Medicare and Medicaid insure more than 100 million people, account for 23 percent of all federal spending and are likely to be an important part of any budget deal. Military spending, which accounts for about 20 percent of federal expenditures, is likely to be included as well.

The problem here is that the Democrats want taxes raised. They don't care so much about cuts, but they want those higher taxes, because they figure the government's spending is just fine and should even increase, but that can only happen if they get more blood out of voters. So the negotiations may include some cuts, but only if the GOP will sign on to tax increases, which they can then campaign on and they know will enrage their base.

Then, if Republicans refuse to raise taxes during bad economic times when people don't have much to begin with, they can claim its all the GOP's fault for not wanting to deal with the debt. Which they created. By overspending.

A lobbyist is quoted in that article saying “The issue is not money. The issue is the effects on people, vulnerable people.” Except the problem is he's wrong. The issue is money, as in we're out of it and under incredibly gigantic crushing debt. That attitude of "who cares how much it costs, we are helping people" is what got us into this position to begin with.

People are more important than money, but if the system collapses, the people will be far worse off than if they have to face cuts now to keep things going. Overspending is what has caused the problem we're now facing, and Democrats are only willing to cut a small amount if they can get more taxes as political leverage.

President Obama refuses to give up on the Government Health Insurance Takeover Act because its his baby - its about the only thing he's accomplished as president that he can point to with any degree of pride; that and announcing the death of Osama Bin Laden. He will not give an inch on that because the cost is irrelevant, socialized medicine is an absolute good to him, so it doesn't matter how much it costs.

They aren't serious about dealing with the debt, in other words. They're serious about playing games. And the AARP isn't serious about caring for seniors, either, because they'd be out with ads complaining about Democrats, too, if they were terrified of any Medicare cuts. You won't see those ads, because the AARP isn't about seniors, its a Democratic party activist agency in the form of an insurance company disguised as a seniors advocacy group.
Posted by Christopher R Taylor at 8:00 AM

" the debt. Which they created. By overspending."

Total horsepuckey like this is just as bad as dishonest AARP advocacy.

So the debt didn't come from overspending?

Not solely from Democrats [ie, "they"] overspending, no.

It's amazing how conservatives (and then, trailing after them, Republicans) got real concerned about spending just when a Democratic President was coming into power. Almost like they care only about the debt for political gain rather than as a measure of doing anything. But that would mean that both sides were simply grandstanding. Surely that couldn't be the case.

Conservatives have always been concerned with the debt. Always. We complained bitterly at Bush's overspending, we complained about the debt every time elections came up. We yelled at Bush for not vetoing anything from the GOP congress. We yelled at him for pushing the prescription medicare bill through.

And we're yelling louder now when the debt is 14 TRILLION dollars and climbing because its enormously worse than ever before, and most of it because of idiotic spending by an out of control Demcorat congress and president.

Leftists on the other hand, clearly only care when a Republican is in power, by their continual rhetoric.

"Most" of the debt was not created by this administration, not if you look at the stats. I think you might be confusing the debt and the deficit.

I must have missed the conservatives "complaining bitterly" over Bush's spending - or his father's, or Reagan's, for that matter. (That would explain why Reagan doesn't seem like much of a hero to conservatives, right?)

I would also disagree that leftists only care about spending when a Republican is in power. I'd say that they don't care about it then, either. It's a stupid position, but a consistent one.