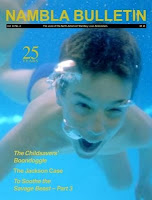 When the Texas anti-sodomy law was challenged successfully in the Supreme Court case Lawrence vs State of Texas, Justice Scalia warned about the consequences and legal results of such a decision by the majority. He stated that while people passing laws need not be concerned with logical consequences, judges do, and are compelled to rule based on previous rulings a sequence of cascading decisions which would ultimately lead places they didn't care for.

Case in point, a Utah man who is suing the state for their anti-Polygamy laws. The man in question is part of a reality show that highlights his polygamous "marriage" to four women which prompted Utah law enforcement to visit his house as soon as the first show aired.

The man, named Kody Brown, is suing based on Lawrence v Texas, which ruled that laws against sodomy were unconstitutional government intrusions on the “intimate conduct” of consenting adults. As Justice Scalia noted, the wording and construction of the decision in that ruling was so vague and open that it is, in fact, resulting in challenges to all sorts of relationship laws. In fact, when combined with other rulings, such as Roe v Wade, which proposed a right of privacy so strong it trumps a right to life, the trouble gets even more significant.

The truth is, while you might scoff at these (and some are particularly facetious) that's exactly where we're headed and already are seeing take place. If society is corrupted so badly that the majority decide they want something stupid or reprehensible, that's one thing; they don't have to follow through to the next step until a judge is involved. As Justice Scalia argued:

Social perceptions of sexual and other morality change over time, and every group has the right to persuade its fellow citizens that its view of such matters is the best. That homosexuals have achieved some success in that enterprise is attested to by the fact that Texas is one of the few remaining States that criminalize private, consensual homosexual acts. But persuading one's fellow citizens is one thing, and imposing one's views in absence of democratic majority will is something else. I would no more require a State to criminalize homosexual acts--or, for that matter, display any moral disapprobation of them--than I would forbid it to do so.

The truth is, judges are supposed to be neutral and objective rather than taking sides. And when the Supreme Court took sides in Lawrence vs Texas, they have forced certain later decisions to be reasonably subsequent. As a society, we can pass laws that some don't care for or find particularly wrong, without following through on the next logical step. Judges don't have that freedom, and by making poor decisions, compel later judges to take that step.
Posted by Christopher R Taylor at 10:36 AM

Pejman touched on this in a recent post on the N.Y. State marriage vote:

IIRC he discounted the "slippery slope" argument based on Lawrence with the starting point that "slippery slope" arguments are logical fallacies (just because the case may imply something, doesn't mean judges / legislatures will be compelled to recognize polygamy, pedophilia, etc., citing solid policy grounds why something like polygamy shouldn't be recognize because of demonstrable social harm, etc.).

I think he's right, to an extent. "Slippery Slope" arguments are weak. But, back in the day society felt it could give all sorts of solid policy reasons why homosexuality should be criticized, discouraged, and even criminalized, as obviously harmful to society.

Legalizing polygamy seems, today, a crazy and repellant idea. Even so, there's no guarantee something like polygamy couldn't be socially "rehabilitated", as it were.

It was amusing, though, after Lawrence came down, hearing various proponents of gay rights and gay marriage, on being confronted with a "Slippery Slope" interpretation of that case, confidently state their social and moral disgust of polygamy as something clearly beyond the pale and outside the bounds of decency, unfit to even be considered as an example.

In its comments Pejman's post also features an entertaining and exasperating exchange between him and another concerning the "Slippery Slope" fallacy. They get into a really bad negative feedback loop of talking past each other.

The thing is, the slippery slope fallacy is only a fallacy when it comes to a logical debate: you cannot prove an argument wrong by saying it will necessarily or even probably lead to another bad thing.

That doesn't mean that slippery slopes do not somehow exist, as any adult is aware of.

A nice, simple, consistent solution: don't have the government involved in marriages at all. To the degree that there are legal benefits to being married, either rework the law so that it does not require a legal difference in status or formalize a civil union law that does not have any prerequisites other than all participants existing. You want a wedding? It's a church issue. Debates over gay marriage? Church issue; meanwhile, people will stop pressuring for legal recognition, because gay civil unions are precisely as valid as straight ones. I'm always baffled by conservatives who doggedly oppose gay marriage, because they are basically asking for government intervention against private actions, which is wholly inconsistent with the conservative mindset.