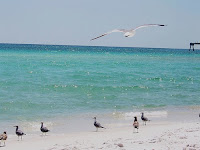 Its been a while since I reported on the Deepwater Horizon oil leak, often mistakenly called a "spill." In fact, not very many people are reporting on it. The legacy media isn't very interested because it isn't a massive disaster and at least in part because it was a reminder of how incompetently and poorly the president reacted to the leak. Unlike Hurricane Katrina, which we're still getting specials and news recaps about because it was useful politically, the Deepwater Horizon oil leak was damaging to their political side.

Yet the leak is pretty much a memory at this point. I remember being attacked when I tried to put the leak in perspective in terms of sheer volume and actual damage, and then being mocked when I said it was not going to be that bad. Well, I don't hear much from those folks any more. In fact, the worse damage people anticipated - long term animal and plant life destruction from the petroleum and the chemicals used to disperse it - is nearly eliminated.

Kevin Anson, a biologist with the Alabama Division of Marine Resources, said sampling has shown that shrimp, crabs and fish appear to be developing normally in Alabama waters.

“It looks to be an average year so far,” Anson said. “There isn’t a big hole for a particular species, or a suite of species. We look at all the life stages, from juvenile to sub-adult to adult.”

Scientist believe a lot of birds and possibly dolphins died, and they estimate numbers up to the tens of thousands, but they aren't sure and don't even have soft numbers to work with.

Over at the Associated Press, Cain Burdeau and Seth Borenstein report:

More than three dozen scientists grade the Gulf's big picture health a 68 on average, using a 1-to-100 scale. What's remarkable is that that's just a few points below the 71 the same researchers gave last summer when asked what grade they would give the ecosystem before the spill. And it's an improvement from the 65 given back in October.
...
The survey results mirror impressions Jane Lubchenco, the head of the National Oceanic and Atmospheric Administration, gave on the health of the Gulf in an interview with the AP Thursday.

The Gulf is "much better than people feared, but the jury is out about what the end result will be."

The picture isn't entirely rosy, they are reporting finding dead baby dolphins, for instance, and aren't sure what that means. Scientists aren't exactly sure what their findings mean primarily because they have a lot more money and people working on the area to see how things are doing than ever before, so they do not have a perfect picture to compare with before the leak and after.

So when they find dead baby dolphins is that normal, cyclical, caused by some other force, or most likely the chemicals in the water and the leak? They aren't sure, but what they do know is that things are much better than anticipated.

Imagine how much better they'd have been with swift, decisive leadership to act sooner. One thing is for certain: the doom predicted by many, particularly drilling opponents, did not come to pass. Like the Exxon Valdez oil spill which cleaned up sooner and returned to normal faster than people feared, this is turning out to be not as bad as the hysterics prophesied. Either they were ignorant or were hyping things up to help their cause of shutting down oil drilling. Either way, its time to stop listening to them cry wolf.
Posted by Christopher R Taylor at 8:39 AM