THERE CAN ONLY BE ONE 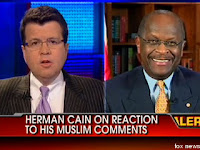 Recently at Ace of Spades HQ, Drew M wrote about a recent statement by Herman Cain:

So Wallace asked the inevitable question: does any community have the right to ban mosques? “Yes, they have a right to do that,” Cain replied, without skipping a beat. He later added that, while he is not willing to discriminate based on religion, “I’d rather err on the side of caution.”

Drew M got a bit hysterical and declared Cain "despicable" for this statement, but I think all of us would agree that the 1st amendment of the US Constitution protects Muslims as much as any other faith.

Herman Cain's potential presidential candidacy is pretty much dead at this point; as a Democrat he might be able to get away with it, but not as a Republican, he won't get press protection.

But his statement isn't as clearly wrong as many people are declaring. In fact, watching the dextrosphere (right-leaning blogosphere) reaction to Cain I get the impression they're elbowing each other out of the way to be the first to condemn him so they seem to be the purest and least associated with someone the left will despise.

When I say he isn't as clearly wrong, I don't mean anything specific about Islam, but about the general concept of religious tolerance and freedom of conscience. This issue is not as clear cut and easy as people seem to think.

HISTORY
To really understand this, we have to know what and why the founding fathers thought about religious freedom and what the 1st amendment means by its protections. The American principle of religious freedom can be best laid at the feet of Roger Williams, founder of Rhode Island, the nation's first religiously free colony. As I wrote in my second essay on the 1st amendment:

Williams argued that forced religion did violence not only to the civilization it was practiced in, but to the faith its self. Faith is a private issue in terms of acceptance or rejection, he argued, and while one ought to believe and obey God, that is between God and the person in question. It was Williams whose concept of Rhode Island as the "Sewer of New England" became the more palatable "melting pot" of America: many things gathering to become one. Like Martin Luther before him, Williams believed that a skilled and capable pagan could be a fine government figure, and that an incompetent, foolish, or corrupt Christian was far worse.
...
In 1779, Thomas Jefferson wrote the Virginia Act for Religious Freedom that provided, among other things, "that no man shall be compelled to frequent or support any religious worship, place, or ministry whatsoever." The bill passed in 1786 and maintained that no "ministry whatsoever, nor shall be enforced, restrained, molested, or burdened in his body or goods, nor shall otherwise suffer on account of his religious opinions or belief; but that all men shall be free to profess, and by argument to maintain, their opinions in matters of religion, and that the same shall in nowise diminish, enlarge, or affect their civil capacities."

Jefferson, not a Christian, held that religion was a matter between a man and God, and not an issue for civil government, save where it violates other rights in a manner that society ought not allow.

This principle has become so closely associated with America that it is simply taken for granted, when at Roger Williams' time it was shocking and unheard of. Every nation on earth had an official religion when the US was colonized. America was the first ever which was founded on the principle of leaving faith up to the people themselves. Jews, Muslims, atheists, pagans, and many other faiths which faced terrible persecution in Europe thrived in the United States.

PREFERRED FAITH
At the same time, there never has been total, perfect religious tolerance in America. In fact, there never has been anywhere, and there never will be. One faith always becomes the most dominant and the most protected, preferred one. That may be intentional and it may simply be by default, but the fact is, humans are religious creatures and we will have faith whatever form that will take.

Even if organized religion and official "faiths" are rejected, that leaves the nation with an official, dominant religious and spiritual worldview which stands above the others and is favored by law. In the past in the US, this religion was Christianity. Now, its secular humanism. The ideas of the atheist who rejects organized religion has become dominant in the United States, rejecting other faiths and imposing its perspective.

Hence, crosses and religious expressions are forced out of public life by this new dominant faith, expressing a preference for this alternate spiritual perspective over the previous Christian one. This is unavoidable, every society will always develop one preferred faith. This one preferred faith will shape popular culture, moral values, laws, behavior, and how other faiths are treated. Some religions are significantly more tolerant than others - and some within the religion are more tolerant than others.

This means that the principle of religious tolerance and diversity was intended by the founding fathers, but they in practice preferred and supported Christianity. Today, that main religion has changed, but the pattern remains.

REJECTION
At the same time, even in America, some expressions of faith are rejected. While you can personally believe and hold to whatever you choose - for now at least - in America, you cannot act upon that faith in whatever way you choose. For example, even if your religion calls you to, you cannot sacrifice children on an altar to Satan.

There are more humble, closer to home examples of these limitations as well. A judge cannot take his faith in Jesus Christ and use that to preach a sermon from the bench during a trial. You cannot put a shrine to Buddha in the capitol building, you cannot put the 10 commandments on public land, any more. To do so would be considered a violation of the 1st amendment's prohibition of establishing a religion.

Now, I believe this has been taken too far, but the principle remains: you can believe whatever you wish, but not express that faith without any limitations whatsoever. Most things that are illegal to people in general society are prohibited to religions as well, although there are exceptions.

There is a religious group called Uniao Do Vegetal or the Union of the Plants which blends some aspects of Christian spiritualism with Brazilian native religions patterns. Part of their worship includes the use of peyote, which is a controlled substance in the United States. The Supreme Court ruled in 2006 that since this is part of a religious activity, it is permitted despite it being illegal to ordinarily own and use peyote.

Similar exemptions have been granted to Native American religious rituals, and since the founding of the nation, there has always been a religious exemption to military service (some early versions of the 2nd amendment actually had that principle specifically written in).

CAIN
Which brings us to Herman Cain's point, in a long, winding fashion. Herman Cain declared that he thought that while the US Constitution protects the 1st amendment rights of all religions, communities could - in the principle of federalism - ban the construction of Muslim religious structures. Just on constitutional principles, Herman Cain is flat wrong. Every community must extend the same protection to each religion.

However, that said, the west is facing a crisis in the limits of its tolerance. Islam stridently works within the diverse and tolerant systems of the west to establish its self more and more dominant. Using the language of the left and tactics of minority groups, Muslims are increasingly protected by law more than other religions or even atheists. Muslims are using the legal system to establish protection for their behavior, insisting on accommodation for their culture (such as foot washing facilities in airports), and generally using the press and the left to attack anyone who dares question them as Islamophobes.

Muslims have gotten so bold in the west that they are successfully building a mosque by the ruins of 9/11, akin to a German cultural center just outside Auschwitz or a Japanese Historical Museum in the Pearl Harbor bay. They're so successful at manipulating the left that the press and pundits condemn anyone who questions this.

At some point, all western cultures have to sit and think seriously about how far diversity and tolerance, how far religious protections go. This is not so much a case of a religion engaging in overtly illegal behavior (although that happens as well - and in Europe often gets a pass, for example) as it is a religion attempting to infiltrate and overthrow an entire political and cultural system.

America is one of the best countries in the world at absorbing and embracing the new, the different, and the alternative culture. Generally speaking, the US welcomes just about any ethnic and cultural difference as becoming part of the melting pot, blending together for a uniquely American culture. Yet that system can be undermined by a people who deliberately and specifically attempt to use it to work inside and usurp it entirely. Like a virus that enters a body and uses its own cells to manufacture its self and conquer, Islam is using Democracy against its self.

As I've pointed out hundreds of times in the past, many Muslims have lived in the US for centuries without needing to take over and overthrow the government. That's not just acceptable, but welcome as part of the unique blend of cultures in the US. We as Americans love the spice of different bits added to our nation, as I noted above. The problem is the smaller group of strident Muslims who insist that the nation change to kneel with a Muslim sandal on its head, to change entirely to Islamic dominance.

And here Herman Cain isn't entirely wrong. As a people, everyone in the west has to be willing to set aside religious tolerance to stop the destruction of their entire way of life. If a religion will not blend in and become a productive, useful part of a culture's society but instead works actively to overthrow it and destroy that society, communities have a duty to oppose that faith.

Basically it comes down to this: if a faith will not play along with diversity and tolerance of other faiths, then it is a corrosive, deliberately destructive force undermining the very principles of democracy and liberty. That cannot be allowed unchecked.

The problem is deciding at what point we will make that choice. How far must they go before we refuse to allow them any further? What can they do before they've gone too far? Because there has to be a point at which we say "no more." It appears that Europe is finally reaching that point - perhaps too late. When and where will America find that line?
Posted by Christopher R Taylor at 9:04 AM