"How much of Oregon state government does the SEIU effectively already control?" 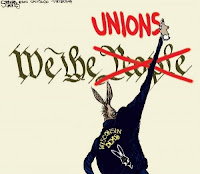 For whatever reason, likely because it is the west coast, Oregon tends to be ignored by the rest of the country. This is a mistake politically, because many of the leftist schemes later tried by other states start in Oregon. Some aren't such a bad idea like the Bottle Bill that put a 5 cent deposit on fizzy drinks so people would return them. Some are just ghastly like the "assisted suicide" law.

New Jersey and Wisconsin get plenty of attention in their union fights, but Oregon's went almost entirely unnoticed by the country. Fourteen bills were introduced to the Oregon State Legislature, each attempting to change school laws in the state. Most were about changes such as making it easier for the local colleges and universities to sponsor charter schools. Others were about making it easier for parents to change their kids to a different school. All were opposed by the big Oregon teacher's unions (the Oregon Education Association, or OEA being the largest).

To give you some idea of the power and influence of teacher's unions in Oregon, in the 2008 elections, the state was flooded with union money to stop ballot initiatives. Betsy Hammond writes at the Oregonian:

Combined, the nation's two large teachers' unions and their state affiliates contributed $357 per teacher to elections in Oregon, nearly all of it to fight ballot measures backed by prolific initiative author and union nemesis Bill Sizemore.
...
One measure would have required teacher pay raises to be based on their classroom performance. Another would have required non-native English speakers to be taught only in English after a year or two in public school. A third would have given middle-income Oregonians a $140-a-year tax break, costing the state more than $400 million a year in lost revenue.

The national average was about $22 worth of campaign contributions per teacher, while Oregon's was more than ten times that, almost double the next highest state in terms of Union spending. Why they bothered to spend so much I'm not sure, because the ballot measures had no chance of passing.

The unions marched on the capitol, SEIU vans showed up, giving out purple tee shirts to everyone they could see, and rallies were held over and over again. The bills passed anyway, mostly because even some Democratic Party leaders were behind the legislation.
Another bill was opposed by almost all the unions on Oregon, this one another state desperately attempting to cut its public employee union costs before they smother the state entirely. The bill would have required public employees to pay 5% of their salary toward health care benefits, something Oregon state teachers already do. According to the Legislative Fiscal Office, HB 2011 would save $69 million in General Fund dollars over two years.

The unions mobilized for that one too, with purple shirts and angry speeches. Oregon's state employee unions, like most states, have exploded over the last few years, thanks to an aggressive drive to sign up every conceivable employee group to the SEIU. One legislator worked hard to make sure that could happen, according to Jeff Mapes at The Oregonian:

During a drive to organize workers who help care for developmentally disabled Oregonians, Tualatin Democrat wrote a letter to officials who help employ the workers, warning them not to say anything even "mildly" critical of unionization.
...
Devlin said it was a "misuse of public funds to participate in efforts meant to dissuade support service workers from exercising their collective bargaining rights. Even mildly worded communications against collective bargaining will carry disproportionate weight because of your role in providing services."

Can't criticize unions or you'll get in trouble from a Democrat politician. How unexpected. In case you can't see the threat here, "misuse of funds" is grounds for dismissal and legal action.

The bill to get public employees to pay for their benefits was defeated by the Democrat majority in the Oregon legislature. I'd say "at the behest of their SEIU masters" but I don't know their motivations, it just looks that way to voters.

In New Jersey, the unions have been less successful, as Jammie Wearing Fool reports. The state legislature has finally realized that the voters of New Jersey are enraged at the unions and suffering terribly from the economic conditions there. When your sector is facing close to 50% unemployment like some in New Jersey, the whining about having to pay a little more for your extravagant benefits are going to be met with little sympathy.

At the New Jersey Star-Ledger, Tom Moran explains the problem for people outside the state, like me:

This is Jersey, and they have been kings for a long time, even when Republicans were in power. A decade ago, they got a 9 percent pension boost just for asking. They rigged the rules on collective bargaining so they couldn’t lose, sending the average police salary to nearly $100,000. It became almost impossible to fire them, so no one even tried.

Public employee unions, which ought to have never been created to begin with, went berserk during fat times and are destroying states like termites, and now when people have noticed and are trying to fix the problem, they go berserk, refusing to give an inch.

Teachers refused to take a pay freeze, despite the recession. Cops wouldn’t yield on benefits, forcing mass layoffs in violent cities like Camden and Newark. Firefighters fought to keep giant payouts for unused sick time, even as union members in the private sector were taking a pounding.
...
Even Thursday, when their doom was obvious, the unions didn’t seem to get it. At the rally, they sang songs about the working class and the rich, as if they were coal miners eking out a meager wage, as if middle-class taxpayers were the greedy mine owners.

And even when they do offer some concessions, they aren't about fixing the problem but about symbolic gestures with the certain understanding that since the system isn't changing, they can turn it all around in a few years and get even more.

And meanwhile, the SEIU treats its own members like trash. According to the Sacramento CBS affiliate, there's funny business going on with inside Union voting and they aren't interested in hearing complaints:

An SEIU member says she was physically forced out of a room after she questioned union leaders about how they were counting ballots, and she recorded the confrontation on her cell phone.
...
Joe Flores, an SEIU delegate, said he witnessed the confrontation but described it as being “quickly resolved.” Mariam’s complaints may not get very far because of the rules regarding protests, Flores added.

“She’s asking questions, but again, only a candidate can raise that protest and the deadline has since passed,” he said.

See, only someone in an official position can complain, not regular union members. And besides, the deadline already passed so shut up and do what you're told.

Because for big unions like the SEIU, even if it ever was about the workers, it isn't any longer. Its about that massive cash flow and power, and the ability to use that to promote leftist causes. Those multi-million dollar vacation homes and lobbyists won't just pay for themselves, sweetheart.
Posted by Christopher R Taylor at 7:37 AM