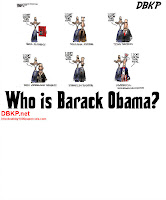 One of the more disheartening aspects of modern culture is the confusion of trivia and information. Trivia is a bit of meaningless data about some subject, such as "Thor' magical hammer was called Mjollnir." It has no significance or import to your life, and while interesting is of no importance. Whether you know that about a myth about Thor or not makes no difference to your or any other person's life.

Information is more important, it is something meaningful and significant to you, such as "I live at this address." Knowing information changes your life and brings you not only power, but the ability to properly function in the world.

When a discussion of President Obama's past comes up, we on the right point out we know so little about the man. Those on the left retort that we know plenty, one even keeps trying to tell me that we know more about him than any presidential candidate in American history.

While that's hilariously exaggerated, we do know a lot of things about Obama's past. The problem is, they're trivial bits of information, like his mother's maiden name, his birthplace of Hawaii, his having smoked pot at some point (I strongly suspect he still does).

What we didn't know is the important stuff. His past is pretty well a big cypher. He has no childhood friends. No classmates can even remember him attending Columbia University. He lost his license to practice law in Illinois, why? We haven't seen any papers or transcripts of his time at Harvard, which almost every president in the past has made available. We have no listing of any law clients he had, no listing of campaign donors from the past, no state senate records. We have medical records, and we just only recently got to see the actual full birth certificate for the man.

And as an author I'd like to know how on earth a young nobody got a $40,000 advance on an unwritten book which he was allowed to change to a biography about his 3 decades of life.

Then there's the stuff we did know but was pretty well buried or ignored by the legacy media. Like his association and friendship with unrepentant terrorist Bill Ayers, his connections to communist radical Frank Marshall, his failed work with the Chicago Annenburg Challenge, his attendance at a radical black supremacy church for over a decade under an anti-American extremist pastor, and so on.

You might say "hey, a lot of those unknowns seem awfully trivial to me" but you aren't thinking of context. I don't really care what your transcripts or papers look like from school. Its not that I don't care about you, its that you aren't looking for the most powerful job in the world. This is a basic employment concept: if you want to convince me you should get the job I'm offering, you need to be ready with information I ask for.

The more difficult, prestigious, and important the job, the more background I'm going to want to see and know. I don't really care if your name is Sotero or Obama, I don't even care if you were born in Hawaii or your mom was married or not. Yes, technically that makes you a bastard, but I only care if you're a Bastard in personality, not birth.

I'm going to want to see lots of background information and data. Think about it: nobody in the US government has higher security clearance than the President of the United States. Nobody. He can see everything and anything he wants immediately. To get a security clearance, even a low level one, requires a pretty extensive background check and information. They go talk to friends and family members, they check school transcripts and travel, they look at all kinds of things.

Isn't that at least as much as we should have for the president? Seriously?
Posted by Christopher R Taylor at 9:02 AM