THINKING AND NOT DOING

"So conservatives, stop trying to be Karl Rove and be Steven Spielberg for a change. If that’s too hard, try being Steven Soderbergh or even Steve Guttenberg." 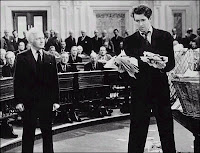 Conservatives are great at making committees. We're pretty organized and orderly, we tend to be business connected. So we form these groups and talk and think, especially think tanks like The Heritage Foundation and so on. They put out papers, study, analyze, and discuss matters. They think.

That's great as far as it goes, it gives ammunition to fight the left, it proves the problems the left are causing and shows how to fix them, and so on. These Think Tanks have their place. Andrew Leigh at Big Government points out their limitations, though:

Mike Flynn recently wrote a cri de coeur on Big Government asking why conservatives have failed to move back the needle on government spending despite the profusion of conservative think tanks, foundations, policy shops, grass-roots organizations, and sundry other pointy-headed groups, mostly based in Washington, DC (although every state now has their equivalents, usually in the state capital.)

He's right, as far as he goes, when he says the reason these fail to make much of a difference is that they don't address popular culture. He points out that while Conservatives are great at ideas and thinking, they rarely connect with the hearts of the public, and rarely even try. Its not that these concepts can't reach the heart, but that conservatives aren't very good at making the attempt:

...if you don’t believe concepts like freedom, patriotism, family, personal responsibility, property rights, and the struggle against tyranny can be portrayed with heart and passion, then maybe you should stick to writing policy papers.

That doesn't make one side right and the other wrong, but it does make one side tend to appeal more to emotions and heart and the other mind and thoughts. And it means that the left has easily dominated entertainment and popular culture for so long their viewpoint has become conventional wisdom and entrenched as the west's worldview.

Worldviews are philosophical in origin, but usually created by culture and stories, by emotion and experience than thought. Worldviews are the mental patterns by which we understand the world around us, but they are rarely examined and understood, we don't tend to think through why we hold the presuppositions and presumptions that we do.

So our worldviews tend to be more formed by what reaches us subconsciously and surrounds us more than what makes sense or how we've been taught unless we were raised specifically to shape our understanding of the world (in religions, for example). For most people, that's through entertainment and popular culture: music, television, movies, etc.
So when Andrew Leigh calls for conservatives to put out pop culture materials, he's got a point: this is how most people form their worldviews, and we have to challenge the presumptions and conventional wisdom around us. There's a big picture of Jimmy Stewart in Mr Smith Goes to Washington accompanying the article. Leigh doesn't mention it specifically, but it is a part of the national consciousness on how we view politics and culture.

In that movie the heroic and innocent Mr Smith goes up against the evil corporations, trying to get a government funding scheme to buy land for a boy's organization which a hydroelectric company desires. Why the land should go to a boy's organization rather than a private power company is not explained, nor why no other land can go to the boys, whereas a dam is pretty well limited to where it can be. The power company is shown to be corrupt and cronyist with politicians, manipulating everyone with money and power, while Mr Smith is alone and populist, with support from home and shines with goodness.

The idea of the federal government buying land for boys is portrayed as absolute good while building a dam is shown as horribly evil. The scheme Smith comes up with is for the boys to pay for the land eventually with fundraisers, but they could do that before they get the land, and as a result not require unconstitutional funding by the federal government at the expense of taxpayers. Meanwhile the dam is an entirely private deal, building a power plant to let people run movie theaters such as the ones that showed Mr Smith Goes to Washington.

That doesn't make the movie bad, it makes the movie one more drip into the ocean of popular culture shaping worldview, and we ought to at least be aware of it. And its hardly the first, or the only example of this kind of shaping.

Hollywood and the rest of popular culture has been pushing these themes for ages: business is bad, government expansion and intervention is good. John Wayne did dozens of quick westerns in the 30s in which he played a white-hatted federal agent who'd come into town and solve all the problems for the people as if westerners were not in fact self-sufficient and independent, and needed the government to fix things. Wayne probably disagreed with the worldview of these films but probably saw them as harmless and they were steady work.

This continuous, almost unchallenged stream of popular culture shaped by left leaning ideas has gotten more and more prevalent until now its rare to see anything that even dares question these ideas, and usually they are watered down as fast as possible to avoid being too un-PC (NCIS, 24, etc).

Andrew Leigh is putting together another group of artists to try to get good entertainment put out that also happens to have a more conservative worldview. Not tracts and preaching, but good stories and action that don't hammer you with leftist presumptions like government will save us, Republicans and businessmen are always evil, Christians are always perverts or lunatics, and so on.

That's a good effort and frankly its bizarre anyone has to put out a conscious effort to get wealthier conservatives to try to support such a concept. But you and I can do this at home too. What are your kids watching and listening to? Do you even talk it over with them? Do you question what you're told personally? Do you listen to the lyrics of the songs you love and wonder if they're even logical or do they push a certain viewpoint you wouldn't usually support?

Are you watching shows that promote leftist values and worldviews and ignoring that part because they are funny? Maybe its time to stop. Maybe its time to not support, fund, and pay people to propagandize and push a false worldview. Not through boycotts but just personal choice. I don't mean "I'll never watch another George Clooney movie!" but "that film presents conservative viewpoints as evil without even trying to give a different perspective."

Like they say, it starts at home, and the easiest way to fight that worldview that the popular culture feeds us is to make a deliberate, conscious effort to examine what we presume and inform what we presuppose. Instead of being spoon fed your culture, choose what's best and do the same for your kids. And hey, if you have money or talent, use those to promote what's right.
Posted by Christopher R Taylor at 10:14 AM

Bill Whittle has (with others) started a company named Declaration Entertainment, with precisely those goals, but Leigh makes no mention of them. I wonder how many other people are thinking the same thing, and are trying to "retake" the popular culture? It might all suddenly fall into place, seemingly out of nowhere, when a certain critical mass is achieved. Everybody would wonder "where the heck that THAT all come from?", sort of like the reactions to the Tea Party.

Will I sit through a low quality movie that's not too entertaining just to gleam the philosophical merits of the film? Yes. In the last year I've watched the Atlas Shrugged movie and Kirk Cameron's 'Fireproof', both of which fall into the low-quality, poorly produced and acted, but thought provoking category.

But non-political, non-ideological folks like my wife or my mother or my best friend who has never voted in his life and couldn't name a single Fox, MSNBC, or CNN news anchor, are never going to watch these types of movies unless writers and directors can figure out a way to make them more entertaining at face value.

With that said, here's my nomination for what could be a great conservative movie in the Red Dawn vein, (I've read this book and it is excellent):