TAXES AND REVENUE, A REFRESHER

"To compel a man to subsidize with his taxes the propagation of ideas which he disbelieves and abhors is sinful and tyrannical."
-Thomas Jefferson 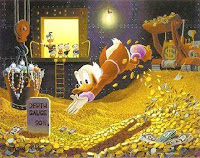 Any time the topic of the budget and debts comes up in a discussion, the left claims tax increases are the answer, and tax cuts resulted in the present federal government woes. Conservatives claim tax cuts will spur growth and spending needs to be cut to reduce the debt. This argument has been going on for decades, perhaps centuries.

The problem with the left's solution is that when governments get more revenue, they don't pay off debts, they spend more. In theory, greater government revenue would reduce debt but that never works because of how politicians treat increased tax revenues. Rick Karlin at the Times Union gives just the latest example of this in New York:

New York's income tax coffers are filling up a bit faster than expected.

The result: Some lawmakers are trotting out new spending plans, even though the governor is warning that it's way too early to tell if the economy and the tax revenues it generates have turned the corner.

Income tax collections were briefly in the spotlight Thursday when state Senate Democrats ran through a series of proposals for more job training, start-up investments and other measures to boost employment. "We need to spur job creation," Democratic Minority Leader John Sampson said in highlighting nearly a dozen bills with a total price tag of $101 million.

The money, he said, would come from a $214 million pot containing income tax revenues that have come in higher than had been predicted in January when Cuomo put out his first budget proposal.

If you want to see how this works in real life, give your child extra candy to stop them from eating so many sweets. I bet they even promise it will work if you ask.

On the other hand, historically, the idea of cutting taxes to spur growth has worked, and further it has increased government revenues. The general perception of tax cuts is that it is simply a handout to wealthy Americans by Republicans, and that reducing taxation obviously reduces government revenues.

The problem with this perception is that the opposite happens, for a very simple reason: the less you take from someone, the more they have to spend, and they will spend it. Every job you've ever gotten has been from someone wealthier than you, because they're the ones who can pay to hire someone else.

When that extra money in your pocket gets spent, that makes the economy more active and growth occurs. As a result, the lower taxes result in greater government revenue.

When President Reagan cut taxes, the rich actually ended up paying more in taxes than they did before the cuts. Why? Because they invested more, spent more, earned more, and hence paid more taxes. In 1981, the wealthiest 1% of the country paid 18% of the nation's taxes. By 1988, they were paying 28% because their taxes were cut.

The same thing happened under President Bush. According to the left-leaning FactCheck site,

The share now borne by the top 1 percent is the highest it has been since 1979, the earliest year for which CBO has figures. And surprisingly, it is larger than in 2000, the last year of President Bill Clinton's administration, before President Bush signed a series of tax cuts that benefited upper-income taxpayers by cutting the top rate on federal income taxes, cutting the rate on capital gains taxes and reducing the estate tax.

Federal government revenues spiked after the Bush and Reagan tax cuts, showing a direct result of greater economic activity spurred by reduced tax burden. It makes sense, if you think about it. If I gave you a 5% raise, you'd spend that money on goods and services or pay off bills; you wouldn't hide it in a vault and swim around in it like Scrooge McDuck.

Reagan left office with a huge federal debt, despite the fact that the rate of growth in federal spending fell from 4% under Jimmy Carter to 2.5% under Ronald Reagan; the problem wasn't tax cuts, it was increased spending. That debt was largely caused by the Carter recession era, and started to shrink by 1998, but overall spending went up and thus the increased tax revenues could not keep up with the increased spending.

Federal tax revenues under Reagan increased by 25% (adjusted for inflation), but federal spending increased by more than double.

As others have pointed out many times in the past, even if every single penny earned by all people in America earning $250,000 a year or more was taken in taxes, that still wouldn't pay for even half a year's expenses. Raising taxes isn't the answer, in fact it tends to reduce economic activity, thus resulting in lower federal revenues.

The truth is, the way you react to a budget that's putting you in debt is to spend less. That's what ordinary people do when they go into debt, they look for ways to cut back. Its only reasonable.

For those of you who are long-time conservatives or have been studying this topic closely, this is all old hat. You know about the interaction between tax levels, economic growth, and government revenues. It never hurts, however, to remind us and to reach out to people who've not considered how this all works.

*This originally ran on the Washington Examiner Opinion Zone.
Posted by Christopher R Taylor at 8:18 AM