THE STATE OF MODERN ART

"You're so ugly you could be a modern art masterpiece!"
-Full Metal Jacket
Chances are you've seen the stuff before, that orange plastic safety net fencing. Its used by construction to partition off areas that are being worked on, highway departments use it to reduce rock falls, and farmers use it to protect fruit trees. It comes in a lot of different colors but orange is the most common where I live.

To the Moreland City Council, its art. This Australian city asked Tim Craker to come up with art for the city and he gave them this: 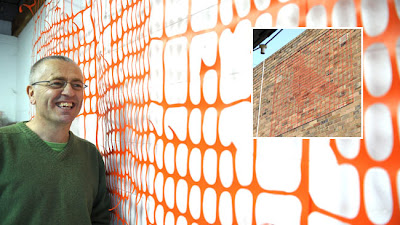 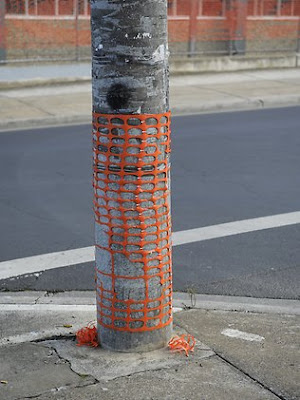 The mayor is less than pleased, claiming that his seven year old daughter could do just as well for free. The mayor has a very odd name by the way: Cr Oscar Yildiz. Vote Yildiz!

Before you reply with "sure you could have done that, but you didn't," step back and think a moment: who, other than a modern 'artist' would have even considered doing this? I mean, anyone could do it as a gag but who would have the nads to pretend that it's art? Tim Craker, that's who.

And he's serious about it. He is a professional, he got paid 7,000 Australian dollars (about $6,600 US) for it by the city council. Craker says

Mr Craker, in Turkey on a self-financed arts residency, said he wanted to create confusion about "what's art and what's function - to make people think about something that we would see and not look at. But some might say 'Hang on, that's not normal safety fencing, that's had something done to it, and what's it doing up on a wall on a building?' So that sort of controversy is good from one point of view."

Mr Craker said the amount he was paid was minuscule compared with the cost of the roadworks, and "the idea is to focus a bit of attention on Oak Park, which as a shopping centre could do with some attention".

You have to love that excuse: it cost less than something else! Guess what, i called up my local Home Depot and they have a 50 foot roll of the stuff for $25.97. I could create several cities worth of "art" for that much. That's an awful lot of markup for labor.

Why? It isn't clear, Craker just seems to presume that controversy is a virtue, an unquestioned, unexamined good like "diversity" and "redistribution." And the taxpayers are out 7,000 bucks. What's really obnoxious here isn't a latte-sipping faux artist polluting the city with this junk, its that he had to come before the city council with a proposal and show them what he had in mind with sketches and mockups. And they decided to fund it anyway.

So in a way, Craker here is like a con man and the council a batch of credulous fools. They look even more stupid, which is probably why the mayor who is part of the council and saw this in advance is trying to position himself against it when people reacted poorly.
Posted by Christopher R Taylor at 9:10 AM

Modern art always comes down to "Let's offend the squares."

I work on my CRAFT, trying to demonstrate skill and create an appealing product and get paid less than this goon.

So the outrage is the 'art'.

I propose a follow-on project: take about a hundred yards of the stuff and wrap a naked Tim Craker up against a light pole near city hall for a couple of days.

Not only would it be art, it would be performance art. And I'd charge less for my "self-financed arts residency" at Palm Springs golf courses.