THE REST OF THE STORIES

"If one does not know to which port one is sailing, no wind is favorable."
-Seneca 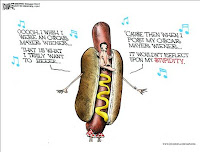 You want to know why I've been light on Weiner coverage?

President Obama offered his version of a budget, including major tax and spending increases, to congress, and the Senate unanimously rejected it.

The debt ceiling was up for vote to be raised, and the proposal was rejected, with 82 Democrats voting against it. Whether they voted against it on principle, because of persuasive arguments, for political calculus or not, all the rhetoric building against Republicans for opposing the debt ceiling increase just fell to pieces.

China has yet again apparently engaged in a cyber attack on a US company.

May's job numbers were less than a quarter of expected.

The mission in Libya is changing to a more active, aggressive role by the US.

Month after month, tornadoes have ripped into the south and middle America, destroying lives and huge swaths of towns.

Housing is plunging again after weak growth, in what economists are calling a "double dip" collapse.

The combined debt of Social Security and Medicare is in the red by $107 trillion, seven times the size of the entire US Economy.
The dollar's value continues to fall as inflation increases

Consumer confidence is plunging, now lower than at any time during the previous economic woes

Egypt is collapsing into chaos and Muslim rule.

Greece is continuing to collapse, asking for a second bailout.

Yes, if this were a Republican the press would have been all over it from day one instead of trying to ignore it or say it wasn't a story. Yes, he demonstrated a lack of self-control, honesty, and judgement that should be fatal to a congressman's career.

But I just can't bring myself to care too much about the whole affair when the rest of the world keeps turning and bigger, more significant stories are out there.

*This originally ran on the Washington Examiner Opinion Zone.
Posted by Christopher R Taylor at 8:09 AM

I hope maybe this will bring some liberals to the realization that Weiner is an insubstantial human being lacking basic morality and dignity, and should never again be taken seriously.

But I already thought that.
So this is just news for other people.