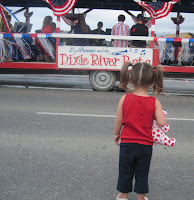 This just came up on the Ace of Spades HQ. Harvard did a study and found out something about the 4th of July. No, they didn't just figure out it is in commemoration of the American Revolution. They figured out its no good for Democrats.

The three key findings of those attending July 4th celebrations:
What's more, the impact isn't fleeting. "Surprisingly, the estimates show that the impact on political preferences is permanent, with no evidence of the effects depreciating as individuals become older,"said the Harvard report.

In other words: according to this study, the more openly and freely patriotic the event, the more it helps Republicans. It helps people be more likely to vote for a Republican, it helps people become more involved in politics and voting, and it helps form their later understanding of life and political values.

Assuming this study is valid - and I tend to give counterintiutive studies greater weight than those that confirm the study maker's bias - this says quite a bit about American politics.

Harvard Kennedy School Assistant Professor David Yanagizawa-Drott and Bocconi University Assistant Professor Andreas Madestam (wow, those names) try to paint this as the GOP being more successful at aligning themselves with patriotism. But even if that's all this shows, it still doesn't reflect well on Democrats or their voters.

First off, most of the "aligning themselves with patriotism" that Republicans have done has been just basic patriotic work like having flag pins and red white and blue bunting, something the local DNC office in town utterly lacks. By contrast, Democrats have consistently questioned, criticized, and found fault with the nation and its actions. It isn't that the US deserves no question or criticism, its that when that ends up being your hallmark, by contrast the other guys look a whole lot more patriotic.

Second, this looks more like one party aligns better with what people want and remember America as being. And whether that's true or not, it says volumes about what the Democratic Party acts like. Because over the years, those initial images and experiences will be supplanted and shaped by what you see and learn about the parties. Apparently what people are learning and experiencing is not contradicting what they thought early on.

Personally I don't see the Republican Party as any more "American" than the Democratic party. But I can definitely see why people would consider one the more openly patriotic and more tied to small town American values than the other.

Third, what does it say about Democratic Party voters when they want to vote for the candidates that don't remind them of patriotism and small town Americana?

Now, what would this study be like if it was done on gay pride parades?
Posted by Christopher R Taylor at 10:00 AM