"The nearly 400 cameras in Chicago, for example, generated more than $64 million in 2009, the last year for which complete figures were available." 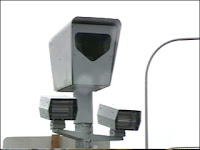 When it comes to traffic cameras, Leslie Blakey, executive director of the nonprofit Campaign to Stop Red Light Running, says there are two camps; civil libertarians who dislike machines handing out tickets, and people who want to break the law and don't like to get tickets.

I'm more in the civil libertarian camp, as I think the cameras are not very helpful when it comes to actual traffic safety, but are clearly intended just to raise revenue for the city and state. However, there are apparently a lot of judges who fall into one of these two camps.

In Los Angeles, the cameras are losing money rather than making it, according to Alex Johnson at NBC:

The city gets only a third of the revenue generated by camera citations, many of which go unpaid anyway because judges refuse to enforce them, the city controller's office reported last year. It found in an audit that if you add it all up, operating the cameras has cost $1 million to $1.5 million a year more than they've generated in fines, even as "the program has not been able to document conclusively an increase in public safety."

Now, there have been several studies that suggest lives are saved and safety is increased by having traffic cameras up, but they aren't very strong studies, and some show that the cameras can actually decrease safety by making people more likely to stomp on the brakes or react poorly when they see one.

Part of the problem with these studies is that overall traffic deaths and problems have decreased, largely because of the changes in car safety features and design over the years. So putting up a camera may have had nothing to do with how much less lethal traffic became. Another problem is that the data isn't very complete.

How incomplete? In a city like Chicago, the institute had to include data from all 2,900 signalized intersections — fewer than 200 of which, or less than 7 percent — actually had cameras throughout the study period.

As Johnson says, the study may still be accurate, but there's not much scientific basis for concluding that.

In general, I suspect most people who oppose traffic cameras do so because they don't want to get tickets. And that means that at least some of them want to break the law and not get caught - if not most. The arguments usually run along the lines of how people make mistakes and you have to give them a break, but I've seen how people drive in Los Angeles and they aren't making temporary mistakes. They drive like lunatics. Everyone apparently thinks those ads with a car sliding sideways on a wet surface are examples of proper driving, they think they're the Stig in the Fast and the Furious and they are superior drivers who'll never have problems.

So they opposition to these cameras is more the typical Libertarian "I don't like this because it stops me from doing what I want" opposition than any small "l" lover of liberty opposition on principle. I do think most people are disturbed by the law being enforced by machines, but on a visceral level rather than philosophical. And that's why I am largely ambivalent about traffic cameras: I recognize that a lot of my opposition is discomfort with big brother machines.

What is not mentioned in the NBC report is the fraud involved in these cameras. One of the favorite tricks is to shorten yellow light times to nail more people running a red, and at least sometimes these cameras have been proven to not calculate speed correctly. And that's what pushes me over the edge.

My perspective on this is more theoretical than most, since I don't have a car and I don't drive. I have driven in the past (and run a red light before by accident) but its been a long time ago.

The fact that these are almost entirely installed to generate revenue, often rigged to trick drivers with the lights, and unreliable makes me dislike the entire system. And I suspect that more than a few judges in Los Angeles share this perspective, if they aren't just speeders who'd rather not get caught.
Posted by Christopher R Taylor at 9:07 AM

The outrageous fines are what sell me to the "no" side.

First moving violation of my long, safe driving life? 1/10 of one second into a red light (I had no idea and have no memory of it happening - not in a hurry, confused, angry, gunning it, or whatever).

No one was harmed, no one was threatened with harm, and I don't drive like "Stig."

In California many people are cited for right turn violations due to the shortened yellow light. This is not ethical or fair in my opinion.