"Anybody who isn't White, Christian, and Republican isn't a 'Real American' to Sarah Palin." 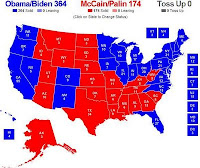 During the 2008 election, Sarah Palin gave a speech in which she praised small towns as the "real America" and considered them bastions of "pro-America" attitudes. She was roundly criticized and attacked by the left for her statements, and she later issued an apology stating that if people thought she meant some parts of the nation were not "real" Americans, "I don't want that misunderstood, if that's the way it came across, I apologize."

Still, the left holds this against her, angry that she might think some parts of the country are more genuine American than others, and that some might be more pro-American than others. Not long before Palin's speech, President Bush remarked that when going on vacation to his ranch, it helped him stay in touch with real Americans, and the same sort of outrage erupted. How dare he say people in Washington DC aren't real Americans!

At the time, New York Times columnist Paul Krugman growled "And what are those of us who live in New Jersey -- chopped liver?"

What Krugman, and most, misunderstand is that this isn't about urban versus rural or big city versus small towns. When Sarah Palin or President Bush (or your average conservative) says something like this, their point is not "Americans only live in rural areas" it is more "the creeps, lawyers, lobbyists, and politicians in Washington DC aren't real Americans."

And by "real Americans" he's not saying these folks are somehow unamerican - although they might be - he was pointing out that they don't represent the country at large. That they are out of touch and in their own little isolated world. It doesn't really matter how many people live in what part of the country. It matters that the slice of particular people that are being referred to are unrepresentative.

There are slices like that all over: Manhattan's uber socialite group, Hollywood's trendy clicques, white supremacists in Idaho, La Raza reconquistas in Los Angeles, and so on. They are little pockets of unreality, people who are out of touch with the nation at large.

It is particularly true that people who are insulated from the general public to the degree that politicians can become in Washington DC start to form their own little culture which is largely out of touch with the rest of the country - in particular the people they are supposed to represent.

So referring to the "real America" is more a compliment to the hard working regular folks in the United States, than a slam on other people. Real Americans are the people who drive the country's economy, who deliver goods, work in factories, grow food, teach schools, drive cabs, raise families, and all the other millions of activities that make up the American culture and identity.

People who don't fall under this category are people that exist outside this core of the nation, people who live isolated from the way things get produced and delivered in the country. The super rich who never have to go shopping and food simply shows up on their table; the billion dollar contractor who flies around the world and lobbies congressmen but never has time to get back home to his family; the superstar actress that can't figure out how to use a credit card because everything is handed to her as a gift and others do the shopping. People like Paul Krugman.

And yes, that includes the political class that lives and breathes Washington DC's air - but only in a very small portion of the city, in its pinnacle where everything is made of marble and nobody has to scrape by a living on food stamps and dodge gangs.

It isn't that these people cannot understand America or have some connection with it, some do. Its that they will tend not to because they become increasingly isolated and insulated from the rest of the country.

Those of us who work out here in America - wherever that may be - are almost alien to this sort of person, and in turn, they are somewhat alien to us. They don't make up the heart of America, even though they are Americans. So in a way, they aren't "real" Americans.

This was originally posted at the Washington Examiner Opinion Zone.
Posted by Christopher R Taylor at 8:24 AM