THE PRESIDENT vs CONGRESS

"There is no doubt that any policies that I implement are going to be based on the economic situation that I inherited from George Bush."
-President Obama
Here are a few bits of information:
There's a chart that Glenn Reynolds at Instapundit loves to show (and I've posted here before to try to emphasize the depth of debt the US is in) that looks like this: 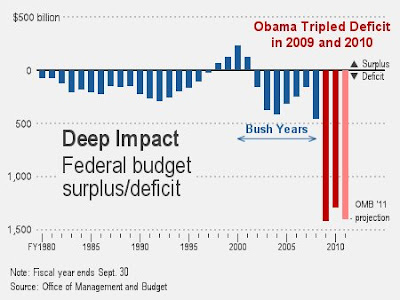 That's not just awful looking, its accurate. That's what really happened. The Iraq war was expensive, but not nearly as horrifically debt inducing as recent spending. And look, see the Bush Years indicated there in blue? That ghastly red spike downward into debt happened after Obama took office, after Bush was out!

Or, consider the Bush years as noted above. President Clinton averaged a debt of about 66% of the Gross Domestic Product of the United States during his eight years in office. President Bush averaged about 60% during his two terms. President Obama is averaging just over 83% so far.

That seems pretty clear, right? It was lower under Bush and incredibly worse under Obama.

So who to blame or praise here, who gets the credit for good news and blame for bad news?

The constitutional system breaks down responsibilities very clearly into different groups. Congress handles spending, the president handles enforcement, and judges handle interpretation and judgement of laws. That seems pretty clear, and its obvious how to see this: Congress is responsible for debts and expenses, the president is not.

The problem is, no bill can pass, including spending bills which generate debt, without the president signing them into law. And the US Constitution requires the President of the United States to submit a budget to congress every year. So who's responsible now?

Here's what I mean. President Clinton tried 3 times to send budgets to congress that would have bloated the debt by 800 billion dollars or more. That much sounds quaint these days, like the price of a car from 1930. But its still a lot of money. Eventually, the GOP led congress pushed through a bill that balanced the US Budget, led by Newt Gingrich and the Contract With America House.

Or look at President Bush. His debt load was lower than Obama's his last year in office, but his last year in office, he heavily pushed for and signed the TARP legislation that cost hundreds of billions of dollars. That money wasn't out of the treasury, it was out of loans from China and just printing money. It created debt, a lot of it. That red downward spike in 2009? Part of it was from President Bush's idiotic TARP signature.

Sure, Democrats in congress passed that legislation, they are ultimately responsible for spending, but president Bush has to get an assist.

But look closer. That spike also includes a great deal of spending that President Obama himself voted for while in congress. Not only would he have signed that were he president but he actually voted to pass it. He gets an assist and the point. And added to that is the "stimulus" package which is pushing the debt into later years by spending almost a trillion dollars (actually when you add the red tape, bloat, and bureaucracy, it ends up more than a trillion) to somehow help the economy.

Or consider the Congressional stats. Unemployment when Democrats took congress in 2006 was at just under 5%. Now its just over 9%. Is that the fault of congress? Well, yes, but not necessarily that congress. Most of the things that caused the economic meltdown in late 2008 was because of the previous decisions by congress. It was their financial laws allowing companies to trade "toxic" mortgages as if they were valuable, the pressure to loan to people who could not possibly pay their debts, and the promises that Fannie and Freddie would cover banks if the worst happened that led to the crisis.

Sure, the Democrats in 2006 had a chance to fix things and didn't. Sure they could have stepped in and stopped the momentum so its partly their fault, but by then it was likely too late anyway. They get a point, but its like scoring 1 point in a 50-15 blowout. It goes in the record books, but means little.

The previous GOP congress had a golden opportunity to do something as well - sure, the Democrat congressmen like Barny Frank and Christopher Dodd worked to block any reform, but they were in the minority. President Bush warned them over twenty times that they had to fix Freddie and Fannie and do something about Community Reinvestment Act, but they did nothing. So they get a point, too, and this one counted more. President Bush is blameless here; he can't make congress do anything it doesn't want to, and he actually tried to stop it.

I can sympathize to a certain degree. Doing something would open them up to hateful, lying cracks about hating poor people and blacks, it would hurt them politically. After trying to save Social Security and being beat to a pulp, the Republican congressmen probably figured it wasn't worth it. But guess what guys you lost in 2006 anyway. Maybe, just maybe, if you'd done the right thing instead of worrying about your jobs you could have stopped this collapse before it took place.

But the blame goes back another layer. The CRA and finance bills that caused the bulk of the crash were written into law in the late 90s, after Republicans lost a lot of seats and barely held the House. Those guys created the situation. They get ten points worth of credit, and President Clinton an assist.

And ultimately, voters get the most credit. If the voters of the United States wouldn't reward bad decisions and stupid legislation, and on top of that punish good decisions that are politically tough, congress would be less likely to do that kind of thing. If voters would go 'shut up, this is obviously and idiotic bill based on activist lies" about the CRA maybe congress wouldn't have pushed it through, and maybe a later congress could have gotten rid of it.

But because the "you're racist you hate poor people" lie almost always works, congress did nothing to stop the explosion. Voters, we're to blame. We aren't doing the right thing at the ballot box and we did it to ourselves. Don't blame congress for your woes in a representative Democracy. They didn't get into power by trickery or surprise. We put them there.

Its not clean and easy as partisans want to portray it. Bush isn't blameless for the massive debts, congress isn't all to credit for a balanced budget. Obama isn't just stuck with his predecessor's inheritance. Its a team effort, and we're the bulk of the players.
Posted by Christopher R Taylor at 8:53 AM