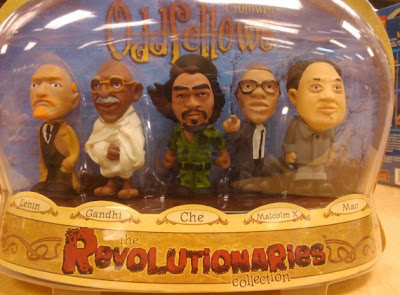 This is for sale in a toy store in St Louis, part of the Oddfellows line. This toy line includes artists, geniuses, scientists, and so on. I think its aimed at the leftist academic parent to get for their kids. I'm kind of reminded of the Little Thinkers toy line that also has Che and other brutal murderers.

I guess this would bother me less if they didn't have ghastly murdering scum like Lenin and Che Guevarra in there and skipped revolutionaries like, oh I don't know JEFFERSON AND WASHINGTON. Why Malcolm X and not Martin Luther King jr? This isn't so much revolutionaries as famous 20th century leftists.