THE NEW LANGUAGE OF RACISM

"Racist: adjective; someone winning an argument with a leftist." 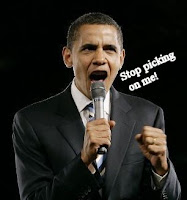 It used to be pretty easy to identify someone who was bigoted against ethnic groups. They might keep their views private among strangers, but typically they'd use language and slurs everyone knew were racist terms. That kind of thing has been so totally shamed in modern American society that one of the few societal sins left is being racist.

Since those terms have been essentially banned from modern culture, the overall tone of conversation has tended to be less overtly racist. However, there are some who will argue that language has simply shifted to more coded terms, language that implies racism without using the specific words.

Not long ago, David Shipler wrote in the Los Angeles Times that whites do this a lot when it comes to President Obama.

...when his opponents branded [Obama] an elitist and an outsider, his race made it easier to drive a wedge between him and the white, rural voters he has courted. As an African American, he was supposedly looking down from a place he didn't belong and looking in from a distance he could not cross.

Now, I'm not going to question the notion that bigots still exist and couch their racism in different language these days. I've met some (and they don't always hide their bigotry when they think I'm one of them). The problem here is that Shipler presumes that everyone who uses any negative term about President Obama is somehow racist.

He's not alone in this. Just about any term used to describe President Obama in a term that isn't positive has been declared racist by someone on the left, particularly in the news media. The implication is that you can't possibly disagree with the man unless you have a problem with his skin tone. Shipler's list is pretty extensive all by himself:

Really, just about anything you say is declared racist if it criticizes or questions President Obama or even his policies and ideas. And that's a real problem.

Not only is it a presumption of malice by the left, but it harms actual, real condemnation of racism. Each time this race card is slapped down for something frivolous or baseless, it cheapens the power of that charge, and it makes real racism seem less plausible and believable.

If you're going to declare someone calling President Obama "skinny" a racist, that makes real racism seem more silly and what's worse, people are less likely to pay attention to the real thing. Just ask the boy who cried "wolf" how well that works out.

This originally ran at the Washington Examiner Opinion Zone, and was my final post there.
Posted by Christopher R Taylor at 7:30 AM