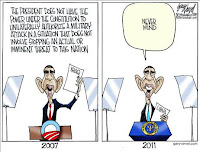 I can get pretty upset about some things and there are times I have to stop reading the news, go read a book, or watch something on TV like Holmes on Holmes to get away from what's eating at my gut. But this story makes me blaze with almost insane hatred. President Obama's press secretary warned congress not to send "mixed signals" about the Libyan War effort.

Sam youngman at The Hill was a the press conference:

White House press secretary Jay Carney said that the more than 30-page report and analysis will be sent to Congress Wednesday afternoon.

Carney also issued a warning, saying it is "important for Congress not to send mixed signals about a goal… we all share."

Let that sink in a moment. This is the spokesman president of the United States, a man who spent his entire political career attacking President Bush for daring to invade Iraq, who continually attacked the president for this act, was so outspoken and divisive on the issue the terrorists and enemies of liberty were surely heartened and moralized by his rhetoric. This is the man who now wants everyone to go along with him because it sends mixed signals.

This is the president who said this about the Iraq war and president Bush while the military was still in harm's way:
And now, no one should question or doubt the Libyan debacle because it might divide the country and send mixed messages to our enemies.

Hey guess what, your boss was the king of mixed messages!

It's really hard for me to not become very profane and abusive when this kind of thing comes up. The treacherous backstabbing scum left who used the Iraq war as a lever to gain power at the expense of the lives of Iraqis and soldiers have a very special cold place in hell waiting for them if not for the grace of God, and this guy wants us to go along with him to avoid doing exactly what he did to gain power???
Posted by Christopher R Taylor at 10:41 AM

his guy wants us to go along with him to avoid doing exactly what he did to gain power???

Sure. It's called 'political gamesmanship'. If you view it from a gaming standpoint, it makes it easier to understand, tho it's no less palatable.

Look at the bright side. The White House has finally managed to unite Congress over an issue.

Good advice and i absolutely enjoyed to read this articles, its a good entertainment. i think most of the peoples are brand your advisory column , because its accepting enjoyment. so thanks for your abundant advisory post.