"Our first African-American president deserves a chance to clean up Bush's mess without being attacked by us." 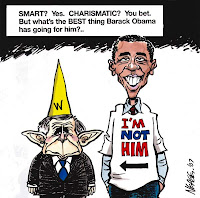 John Hawkins runs Right Wing News, among other sites, and he wrote an article for Town Hall that really hit home. A lot of people have done posts comparing the treatment of President Bush by the press to that of how they treat President Obama. Of all people Ted Rall did a bang-up job presenting the ridiculous, deliberate bias at newspapers to protect Obama recently.

But nobody has done as good a job, in my opinion, as John Hawkins did with this piece. He took six areas which are true about President Obama, and depicted how the press would cover it were he President Bush instead.
There are more, of course.

President Obama totally botched the gulf cleanup, he was slow, incompetent, didn't bother coming to see the place for days, downplayed it in the press and his team acted like it was no particular problem for a week. President Bush immediately took action to help victims of Hurricane Katrina, sent aid the same day it was requested, and visited several times within days of the storm.

Katrina was hung around Bush's neck like a millstone and every lie anyone whispered was reported as fact, while the press hastily downplayed problems in the gulf and haven't mentioned it again. No one is doing yearly retrospectives on the gulf oil spill and its affects on the population there, no one is making special HBO shows about people living in the area recovering from the spill.

President Bush tried time and time again to reach across the aisle and work with Democrats, inviting them to help work on bills and compromising to achieve goals with them. President Obama deliberately insults and attacks Republicans, rejecting any input and calling them names. Bush was called "divisive" and Obama is called "courageous."

There's practically a cottage industry of "what if this were Bush" posts on right-leaning blogs, pointing out how unreasonable the hate of Bush was and how totally the press protects and supports President Obama.

The fact is, whether or not you agreed with the press treatment and depiction of President Bush, there is no objective or rational person who could deny that they have done a total reversal in their treatment of President Obama. Things they would have savagely attacked in Bush they ignore or even praise in Obama.

Comedians would have been making jokes about President Obama's stuttering and desperate reliance on the teleprompter, his mechanical repetitions in speeches, his many gaffes and flubs, his talking over the British national anthem, so many things. Yet all we get from them is silence because he somehow doesn't provide them with fodder for comedy, or very weak, short-term jokes.

And inconsistency is one of the greatest peeves of just about everyone on earth. That violates everyone's deep down basic understanding of fairness and justice.
Posted by Christopher R Taylor at 8:33 AM