"The only way for a government to get out of debt is by raising taxes."
-Yahoo answers #1 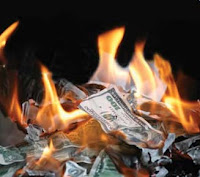 Every time a discussion of the debt comes up, someone on the left immediately cries that we should raise taxes. At first blush, this seems like a reasonable idea: if we're in the hole, we need more revenue. It only makes sense to get more money if you have to pay your bills, right?

The problem is that when the government gets more money it spends it. Case in point, New York's state government. Rick Karlin at the Times Union writes:

New York's income tax coffers are filling up a bit faster than expected.

The result: Some lawmakers are trotting out new spending plans, even though the governor is warning that it's way too early to tell if the economy and the tax revenues it generates have turned the corner.

Income tax collections were briefly in the spotlight Thursday when state Senate Democrats ran through a series of proposals for more job training, start-up investments and other measures to boost employment. "We need to spur job creation," Democratic Minority Leader John Sampson said in highlighting nearly a dozen bills with a total price tag of $101 million.

The money, he said, would come from a $214 million pot containing income tax revenues that have come in higher than had been predicted in January when Cuomo put out his first budget proposal.

See how that works? The instant more money comes on the table, they start planning ways to spend it. This is not a group of people who will use excess revenues to pay down the debt. Ever. So even if there was actually enough money out there in "the rich" to pay off the federal debt (which there is not), raising taxes on "the rich" would not matter anyway. They'd just spend it.

Its not like this is some isolated case or unprecedented, it happens every single time. Giving more money to the government to pay their outstanding bills is like giving a junkie cash for the same reason. You may as well have thrown it in a fire.

I do have to say its astounding to see the New York state government stupid enough to want to repeat the federal Democrats' recent idiotic Keynesian mistake of spending money to stimulate the economy. Yeah, that worked great. Were they not paying attention? Or is this the usual leftist "well they didn't do it right, we're more enlightened" attitude?
Posted by Christopher R Taylor at 8:16 AM