"Though we are living through difficult and uncertain times, tonight I want every American to know this: We will rebuild, we will recover and the United States of America will emerge stronger than before"
-President Obama 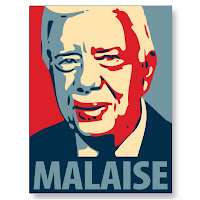 If you're a younger voter you probably don't remember this, but during the 2000 election, the Clinton administration released economic data that was deliberately adjusted to make things look better than they really were. They cooked the books, in other words, to help Al Gore's election because it would hurt him to admit that the US was, in fact, suffering from the start of a recession as then-Governor Bush was pointing out.

Since its hard to get the raw data and it takes a lot of work to dig through the information, its easy for the federal government to fudge data. And since they keep changing how some information is determined, it can be misleading just by the standards used. Unemployment, for example, ignores people who've just given up, which brings the numbers up about 10% or so (and always has). The Obama team has for more than 8 straight quarters estimated growth to be higher than it really was and later (with much less reporting) adjusted it down.

The reason I bring this up is that if you ask 50 people in America how the economy is doing, you'll get 49 who say its lousy and the 1 guy that says "its great!" works for the federal government. Few people buy that we're actually recovered from the recession. Economists are actually arguing over whether we have or not, since the unemployment numbers are so lousy, and there's no official definition of either recovery or recession.

Technically, most economists say a recovery is when you have 2 straight quarters of GDP growth, which happened last year. The problem is, growth is only one slice of the economy, and if everything else is down, is it really a recovery? Almost 60% of Washington Post surveyed people think the economy is still not recovered.

And for them, it probably isn't. That's the problem with any economic data. I remember well reading people who swore up and down the economy sucked under 4% growth and massive job creation under Bush that things were miserable - because they couldn't find work. Michigan has for over a decade been in awful economic shape no matter what the rest of the nation is like. For them, recession has gone on for a long time.

I can't help but wonder if the data we're getting from the Obama administration isn't somewhat... less than honest. I don't mean they're just making up numbers whole cloth, but that they're adjusting them for various factors and choosing careful ways of reporting that give an answer that isn't true.

We're absolutely, unquestionably experiencing inflation right now. Just about everything costs more. Food has been going steadily up in price for years, but you don't see inflation reported. Part of that is a sycophantic legacy media desperate to avoid reporting anything that might hurt Democrats, but part of it is that inflation numbers are adjusted for all sorts of things. As I wrote a few weeks ago, some tech has gotten cheaper, but as a man yelled in a crowd: you can't eat an I-Pod.

And that, I think, is why people don't buy the "Summer of Recovery" nonsense the White House keeps putting out. I've written this several times in the past, but you can lie people into thinking things are actually worse than they really are pretty easily. Just parade a line of miserable people in front of the camera, qualify all good news with something bad, emphasize any bad news, and people start to figure that while they are doing well enough, everyone else must be doing poorly.

The reverse doesn't work. It doesn't matter how many shiny, happy people you line up in front of the camera talking about how great life is, if you are having a hard time, who gives a damn about those people? When you haven't had work for over a year, when everything costs more, it doesn't matter if the economic news is spun positively and bad news is buried on page 57-Z. You can feel it, no matter what you're told. In the Carter years, this was called malaise, a general feeling of misery and disquiet.

And malaise is what people are feeling now. The Obama administration probably didn't help its self by putting out rosy projections when they pushed the stimulus package "we could see as high as 9% unemployment unless this is passed!" but the truth is, it doesn't really matter how they try to spin this.

Some things people just know at a gut level, like how most people knew the housing bubble was doomed to collapse soon. The truth is, President Obama is the food stamp president. That's probably the best monicker any politician has come up to hang on him, and partly why the push back was so savage and angry and cried "racist" to shut it up before it took off.
Posted by Christopher R Taylor at 9:47 AM

As long as there is a lot of people who's mortgages are underwater, as in more than 20% of the homes in Oregon I think I heard the other day, it will be difficult for us tho think that the economy is better. When what I own is worth much less than what I owe I can't be happy.

Disclosure: I'm a civilian employee of the Department of the Navy. Though I'm Civil Service, I don't belong to a union.

I live "off the economy"; paying the same prices for things that everyone else does.

I didn't vote for Obama.

And the economy is lousy. I doubt you'll find many federal employees (especially here in California) that disagree.

Please don't make blanket statement about federal employees. It's akin to saying that since one is of a given ethnicity, one must crave certain foods.

Well it has more to do with the fact that working for the federal government has been great right now; its the one sector of the economy that's booming.