These are the ongoing exploits of our gaming group playing EverQuest using the D20 system. We're playing over the internet using Skype to chat and Maptool to show the action. 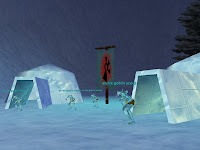 Well, I killed the party.

It wasn't intentional, it was a feature of Maptool that did it. The party was exploring the Maze and encountered some goblin whelps fighting polar bear cubs, since unlike in the MMOG the monsters don't all get along. Having wiped out the whelps easily, the ranger Bacis tracked the whelps back to their home and here's where it went poorly.

I hadn't populated the entire goblin village yet, so I put them on the map as the party got nearer and when they peeked around the hill north of the goblins, they saw some on the map. I told them "you see a lot of Goblins" and repeated it, as they seemed inclined to attack. And they attacked anyway. I looked at my map and figured "well maybe its because they can't see some of them behind igloos."

Then when one goblin attacked the bard (named Cru) someone asked what goblin was attacking? They couldn't see him. I figured it was some odd sight bug, so I checked the goblin and clicked the "visible to players" option. We went on. More goblins attacked that they couldn't see.

It turned out that when placing the goblins I didn't select the "visible to players" option on all of them. So there were about double the number of goblins they didn't see and weren't paying too close attention to the numbers in the long list of initiative. They wouldn't have attacked, likely, if they'd seen the whole group.

And since Maptool gives a visible feature that the players can react to, they paid less attention to other clues. So the party was obliterated as they tried to retreat, since I am playing this campaign a bit more ruthless than I usually do, for one main reason: respawn.

Since this is a simulation of EverQuest, where characters show up again (stripped of gear) at their "bind point," if a character dies in EQD20 its not as traumatic as it might be in other campaigns. They just have to get their gear back, which is lying in a pile. I chalk it up to protection from the powers that be and being favored of the gods or what have you.

One bright spot in the campaign is that I was able to get the sight blocking and lighting feature to work. I'm not exactly sure why or how, I didn't do anything differently this time, it just worked when I tried it again. This has a difference on the play and how characters move. When you can see everything clearly, you move comfortably and easily along. When there's a black unexplored region beyond where you've been, you tend to be a bit more cautious and uncertain. It also makes the terrain more dynamic as features like the aforementioned igloos and even a ship's mast block sight, giving them a greater sense of physical presence.

I did find out, however, that the sight blocking and light effects were too much for my 5 year old Dell to handle, so I had to swap over to the new gaming system which runs it very smoothly.

So that worked out well and I'm looking forward to the next session. My only real complaint is that its taking longer than I hoped for the party to get level 2. I had estimated a couple sessions for leveling up, and its been 2 and they are barely half way. And that includes a really awful encounter.

I don't want them to rocket through levels, but I do want the players to feel a sense of advancement and to move through the first few really pathetic levels more swiftly. I may just throw more experience at them just to move things along because characters are so very weak at level 1-5 or so.

It probably would have helped if we hadn't had to skip 2 weeks due to various real life interruptions among the players and myself. That's the problem with a bunch of grown ups playing RPGs: we just have too much life to sit and play days on end until 2 in the morning.
Posted by Christopher R Taylor at 9:11 AM

One point, we didn't see any of the invisible blink goblins on the initiative table either. Just the few that our apparently near-sighted mage saw. It was a intestinal clenching moment though when the additional 10 gobbo's suddenly popped up though, lots of fun.