DON'T STAY HOME WITH THE BLUES 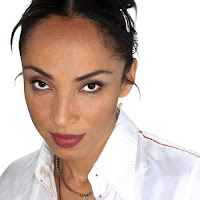 Sade put out the song "Feel No Pain" in 1992 on the album Love Deluxe. She delivers it in her classic torch singer blues style and its a great song, like all of the album. Come to think of it I cannot remember a single Sade song I haven't liked.

Whether this was intended to be a timeless song about the hardships that come in life or specifically about England's or America's economic problems at that time I do not know but it surely fits today better than in 1992.

The chorus, such as it is, is an appeal for these people to get help; is this meant religiously, as a prayer, or an appeal for people to help their neighbors, or is it a request for greater government assistance because they cannot make it on their own?
Help them to strive
Help them to move on
Help them to have some future
Help them to live long
Help them to live life
Help them to smile
Don't let them stay home and listen to the blues
Again, that's not clear, which is part of what makes it such a good song. She doesn't try to make a political statement here, she's just making music. Everyone needs help sometimes, I'm not so conservative that I believe every single person in every single circumstance should always stand on their own.

I even believe that the government has a role in helping people in need, although I believe almost all of that help should come in the form of getting out of the way so individual citizens can help themselves as much as possible. My version of government assistance is to punish fraud and evil and to give as much freedom to business and society as possible. When big brother isn't taking up so much space, individual people can move more freely.
Pappa been laid off
Mamma been laid off
Billy can't get a job
For too long too long
Don't let them lose
We gotta give them a chance
It's gonna come back on everyone
If you don't make them dance
Don't let them stay home and listen to the blues
Unemployment benefits have recently been extended for 99 weeks total now, with more people out looking for work than at any time in American history. Granted, there are more people in America than at any previous time as well, but that doesn't change the basic fact: there are more people facing the pain this song describes than ever before in the nation. 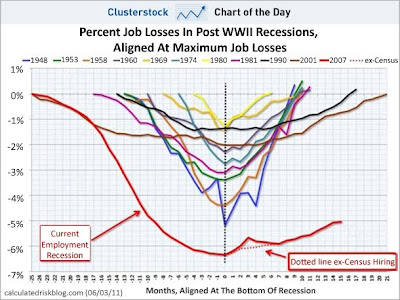 As Ben Tracy notes at CBS:

About 6.2 million Americans, 45.1 percent of all unemployed workers in this country, have been jobless for more than six months - at its highest since the Great Depression.

Whether or not the White House can cook the numbers to make it look like we're seeing growth in this country, there aren't jobs out there for far too many people.
There's nothing sacred (why why why)
breathing hatred
We have to face it (why why why)
No one can take it
And feel no pain
And when you go through that kind of difficulty - particularly if you have a family or people to support - it can be very hard not to become bitter, to curse God, and to turn on others. The pain eats you inside, the difficulty seems insurmountable, and for men particularly it feels emasculating. A job is all men have left in modern culture to show they can protect, provide, and demonstrate their strength.

Help them to strive
Help them to move on
Help them to have some future
Help them to live long
Help them to live life
Help them to smile
Don't let them stay home and listen to the blues
Some less optimistic pundits are suggesting this may be the new normal, 5-8% official unemployment numbers. But a nation cannot survive having 10-15% of its population perpetually out of work as the actual, full numbers would demonstrate. Not only does that create a significant burden on the system, it means that businesses and tax bases are perpetually depressed.
One day we're gonna wake up
And the ghetto's all around
All over my friend
Have you ever seen a man break down?
That means the whole country slouches into the ghetto, slowly, over time. Like Detroit whose decline was so awful since the 1960s, an entire nation would see that kind of collapse. Not just things being less easy and wealthy, but things regressing in terms of technology, infrastructure, security, and sanitary conditions. Like the collapse of the Roman empire, a nation that loses its taxes and business will slide back in time to less advanced, less sophisticated times.
Do you know how that feels
To walk the streets with your head held high
Why, why, why
Oh Lord, have mercy
Did you ever see a man break down
There's nothing sacred
Breathing hatred
We have to face it
No one can take it (how can they take that much)
And feel no pain

Ooh did you ever see a man break down
This isn't something we can ignore or figure will eventually just get better. The core reasons for this collapse have to be addressed for our sakes and our future, the children we see today. When President Bush was running for election the big cry was that the youth of that time would be the first in American history to not see their lives better than their parents.

Well guess what: that might really happen unless things change now. And the only way that can happen is to reverse the incredibly destructive policies and hard left shift that the Obama administration and the Democrats in office are imposing on the country.

This happens every time the left gets power in the US. The public recoils in horror at what they've done and hard left governments don't get power again for decades, but then a new generation says "aw, lets try it, they sound so compassionate!" and we get this kind of thing again. I'd like to think "never again" would be the cry, but with the popular media and academia dominated by the left, Orwell's 1984 has got nothing on the rewriting that goes on to hide what really happened and why.

That's how long it took me to find a job - at flinking Home Depot, no less!