"It's a very difficult job and the only way to get through it is we all work together as a team. And that means you do everything I say. " 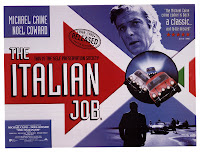 I sort of liked the recent The Italian Job movie, and it certainly did wonders for the sales of Mini Coopers. So I decided to look up on Netflix to see if they had the original, with Michael Caine. These days if there's been a remake, it seems like Michael Caine is in the original 9 times out of 10.

This original The Italian Job is actually set in Italy, instead of Los Angeles, but I guess The Californian Job doesn't really have the same feel.

The original movie starts out with a cool, Bondian man driving a sports car through the Italian Alps at high speed, a 60s era song playing as credits roll by. He's going faster than I would (especially with one of those old cars) and the scenery is spectacular. Then, he heads into a tunnel and the movie shows you what its going to be like: a terrific crash and eruption of fire; he ran into a huge earth mover parked on the opposite side.

The beginning is so jarring and unexpected the audience almost certainly gasped when they first saw it back in 1969. From there on out, the movie has its theme: sudden, unexpected twists after an extended period of solid, smooth entertainment, your bed falling to pieces in the middle of a pleasant dream.

There are brilliant pieces in the movie, such as the sunglasses at the edge of the road, the quiet sounds in the mountains ruined by crashing down a hillside without any need for a soundtrack, and so on. At the same time there are farcical bits in the movie, such as a fight with stuffed animals that squeak, the way the mafia are portrayed (sunglasses, black fedora, black suit, shotguns and tommy guns, all standing like they're about to bust out dancing and singing in a musical), and there no actual menace despite how there are several scenes which ought to have been.
The film is at some points a very serious crime drama, some points a comedy, and some points just silly. The patriot crime lord living like a literal lord in an English prison was an interesting character, but he was so overplayed that he seemed silly. The character Caine played was like an anime character: I kept expecting his nose to suddenly bleed when he saw a pretty girl or for his jaw to drop to the floor with gigantic eyes on his face when he was surprised. He is part time serious and capable and part time just goofy for no apparent reason.

I don't really care for this era of filmmaking because (like too many movies today) the directors were putting such a heavy stamp of their "style" on the movie that it interrupts the flow of the story and ruins any feeling of immersion. You can't lose yourself in a movie that is so deliberately contrived to demonstrate a technique or show off characteristic style points a director favors. Back then it was a new wave of Fellini worshiping film school types, today its a batch of music video guys given film scripts.

The extended scene with the minis driving through Turin to escape was well done for the most part, but it had segments in it that seemed there just to be funny, as in "let's have them do this, so the audience will laugh" not because they made sense or would help the criminals escape. Driving on top of a large oddly shaped building was interesting but pointless, involving a gag in which the camera refuses to show you half of the building. The cops were pretty amazing, though. They always had someone on the tail of those little cars no matter where they went, what they did, or how far they drove, until the very end.

Still, the whole Mini Cooper sequence was so fun to watch I have a sneaking suspicion that the writer traveled to Turin and thought about how you could drive a little car through some of these places and escape police pursuit, then built a plot around it. Which would explain the magic ninja cops who always managed to get on their tail, no matter what; they had to show how you could creatively ditch pursuit, but had such a long list of ways they had to keep picking up pursuit again.

The film followed the usual caper pattern in many ways. There are two kinds of caper movies:
This one followed option 2. The fact that every single caper movie follows these rules unswervingly takes away from their suspense a bit for me: you can always tell how its going to work based on how they tell their plans. If the camera fades away or its obscure and incomplete what they mean, they'll succeed in their theft, so you don't worry about things going wrong and them being stopped. They'll get stopped later most movies, but the scheme will work.

Then there's the ending. I guess it was meant to be interesting and something people would chat about, and I will not give it away in case you haven't seen the original The Italian Job but it doesn't resolve the movie in any way. You're left hanging and no one knows how it ends, exactly. How they get there is one of those sudden twists I mentioned earlier, but by that point you're expecting it because of how the movie has been designed so far: its the other end of the book to bring you full circle from the beginning of the film, but its so 60s and contrived it left me disappointed and unhappy with what was otherwise an enjoyable film.

I recommend the movie just to enjoy how it plays out, but overall I didn't really like it any better than the remake. Which oddly enough is how I felt about Get Carter as well. Its worth seeing just to hear Michael Caine's dead on upper crust accent when he picks up his car.
Posted by Christopher R Taylor at 8:14 AM