BOND vs US CERTIORARI

"Hold on to your hats."
-The Quiet Man 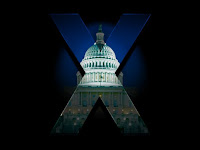 The Supreme Court of the US recently made a huge ruling that is much more significant than might seem obvious at first blush. They ruled that individual citizens, not just states, have standing under the 10th amendment. To understand this, you have to know about two concepts.

The first is the idea of "standing." In court terms, this means someone who has a legal basis for bringing a lawsuit or court case.

For example, a few years back a man brought a suit against the United States for the words "under God" in the pledge of allegiance, and it got all the way to the supreme court because the 9th circuit court (yes, those guys again) nodded gleefully and called the phrase unconstitutional. The Supreme Court threw the case out entirely. Why? Because they ruled the man didn't have standing to bring the suit to begin with.

It turned out that he was trying to sue on behalf of his daughter, who he barely had any contact with and was not a guardian of or legal representative. In other words, he had no legal basis for the complaint, it was as if it was happening to some other child he didn't even know, and you can't sue for someone else unless you have legal power or representation for them.

So you have to have legal standing to bring a case against someone, the case has to be about something somehow affects or damages you.

The second thing that needs to be understood is the 10th amendment of the US Constitution. It's a short one, but probably the most important one of the Bill of Rights these days:

The powers not delegated to the United States by the Constitution, nor prohibited by it to the States, are reserved to the States respectively, or to the people.

This is a difference between, say, someone having fifty cars and listing ten of them officially... and someone having no cars and being loaned ten of them to drive. The government only can do what it is permitted to do by the US Constitution, a concept called "enumerated powers."

The 10th amendment makes that extra clear in case (as now) a few centuries later people stopped reading what the founders said and thought about the document and started just making up whatever they wanted. It says "you can only do what you're permitted here, and the states and citizens have all other powers not enumerated for you in this document.

And while the 1st amendment is protected to the point of absurdity beyond what the founders intended, and the 2nd amendment has strong advocates... the 10th pretty much was crumpled up and thrown in the trash. There's not even any remote attempt to care what it says, let alone justify anything by it. The federal government does not even consider the 10th amendment when they make a bill.

Well now they might have to. Because the US Supreme Court just ruled that while in the past states were considered to have standing to sue the federal government over 10th amendment issues, now individual citizens do.

In other words, if the federal government violates the 10th amendment, you can sue them. Sure, it has to be in a way that actually affects you, but that's hardly difficult to demonstrate.

Reading the 10th amendment makes that pretty obvious: it says clearly that anything not permitted the federal government in the constitution belongs to the states and people. There's just no way you can read that and somehow conclude that it doesn't actually mean that people have this power.

So if the US government violates the 10th amendment... it has violated your power, no matter if it directly affects you or not. There doesn't have to be demonstrable damages, it is presumed that a violation of this amendment affects you.

This might seem like nothing much, but it is actually huge. Now, instead of having to wait until your state gets around to taking action to federal overreach and constitutional violations, you can take action. And believe me, people will.

Because in the past, states have been bought off by the federal government, or warned off. If a state wanted to sue the feds over a 10th amendment issue, they'd be told "well that's fine if you don't want any highway funds," and run away like a whipped dog. Individual citizens can't be bought like that.

You get the idea. This could get real interesting, real soon.
Posted by Christopher R Taylor at 8:30 AM