"All the perplexities, confusion and distress in America arise, not from defects in their Constitution or Confederation, not from want of honor or virtue, so much as from the downright ignorance of the nature of coin, credit and circulation."
-John Adams
The US Government keeps trying to promote the dollar coin. Worldwide, coins for the basic denomination of money are in use most places, such as one-pound coins in England, one-Euro coins around continental Europe (for now at least) and so on. They've been trying for years without much success.

Their biggest debacle was the Susan B Anthony dollar, released with huge amounts of promotion and pomp, probably because almost nobody knew who she was before the coin was stamped. The big problem with that one was its size: it was almost exactly the same size and weight as a quarter. Sure, it had an angular stamp rather than circular on the face (the edges were still circular) and it looked different, but it was so similar to the quarter that vending machines had a hard time telling them apart. So did consumers, and they didn't care for it.

So the US Treasury tried several other tactics. My favorite was the Sacajawea gold dollar, which was plated with gold. That looked great, was the right size, and had a special weight. It felt and looked valuable. I used to keep one in my wallet as an emergency buck, something just in case. I still see them around and would rather spend them than paper money.

One of the reasons these coins don't take off is that Americans are just not used to coins being worth much. its been a quarter century since you could buy anything useful with coins, and people just aren't used to using them much. Coins take up more space than bills, and most folks aren't used to carrying them around.

I should make a qualifier here. People who live in states with a sales tax or who have to use toll roads carry coins around, but they don't carry them around to spend. You keep money in your car for the toll bridge, you keep a mountain of silver around because of that annoying sales tax that keeps giving you more change than you expected, but most folks don't carry a pouch filled with coins.

Stores have a problem with the dollar coins as well. Here's a cash register drawer: 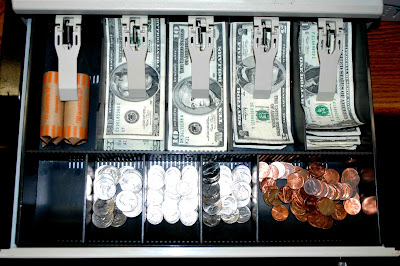 See those coin slots? There's five. The four main ones are filled with change, but the fifth is used to store rolls of coins in case you need to break out more. Either you carry extra rolls of coins, which is what everyone is used to, or you carry dollar coins in that last slot, which nobody is used to, and which slows things down when you run out (call the manager, get some out of the safe, etc).
This is the same reason that the $2 bill only took off at the ponies; there's nowhere to put one, most big stores put 50s in that last slot and small ones put checks in there. Sure, people can adapt easy enough (small stores put big bills under the drawer, if they take any), but its not something folks are used to.

The latest effort by the mint is a presidents series, dollar coins with different presidents on them. These are also gold, so I'd probably like them, but the problem is I've never seen one. In fact, few people have. The US Treasury Department has a billion of the things stored in a warehouse somewhere (not Fort Knox). Since 2007 the federal government has required the creation of these coins, but since most stores don't care for them, most people don't want them, and most machines aren't ready for them, they don't get into circulation very well.

So they go on shelves. Which really is a shame because I love the idea, I wish we had more coins, and I do carry a coin purse around. Its not a very good one, but its the only one I have. I like coins, they feel valuable, they look good, and they make me think of olden days and pieces of eight. They're treasure. Banknotes are just paper (well cloth, but you know what I mean).

Yet I rarely use money to buy things these days, even though I like the coins. I use a piece of plastic or a number. Its just more convenient. I use coins to buy little stuff, but anything over a couple bucks out comes the card. I don't have to carry money with that debit card, just the plastic.

And maybe that has a lot to do with it too; its like adding a new fancy buggy whip as Henry Ford rolls Model Ts off the assembly line. Maybe they are great, but who needs them these days?
Posted by Christopher R Taylor at 8:56 AM

Dollar bills have about an 14-18 month life expectancy. Coins last for years.

Stop printing dollar bills. Simple when you think about it. Cheaper too even at 30¢ a dollar coin.

Sure. And mandate fat-free cheese on pizza while you're at it.

I'm a bit of a throwback (I love coins too), usually paying cash for anything less than $50.

A few years back my daughter saved up money for many months to buy herself an iPod, doing various chores including fish-sitting for a neighbor. When she'd saved enough we offered to take her cash and pay for it with plastic, but she wanted to change it for as many big bills as she could and pay in cash - herself. The look of pride on her face as she handed the money to the surprised clerk was absolutely priceless - wish I'd captured it on media. Four years later she still has that iPod and proudly uses it every day.

The US Constitution gives the federal government the power to mint and distribute money as they see fit; if that happens to be coins instead of bills by no longer printing dollars, that is hardly some tyranny. And he's right it would be a bit cheaper.