"The schism in the Coffee Party is so bad, they split up into two different booths at Denny’s."
-Jim Treacher 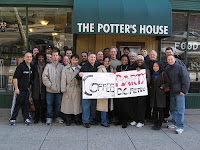 When the Tea Party movement spontaneously formed out of grass roots frustration and anger at the continual overreach and arrogance of government which got exponentially worse under the Democrats, the left was at first contemptuous. The movement meant nothing, it wasn't worth covering, who cares, its just a couple old people.

Then they got insulting: its all racists, they're old and stupid, they're afraid of change, and we should call them a disgusting homosexual term, even on national TV. Finally, the legacy media realized this was too big to ignore and not going away, so some coverage started, but the coverage was scant, argumentative, and tried to focus on the negative as much as possible.

Ultimately, the Tea Party was seen to be a genuine, dangerous political force when in November of 2010, Democrats were slapped around in a shocking manner, far more than the usual off-election woes for the sitting president.

The left, once they started to realize the Tea Party was significant, tried to start up opposing groups. The Coffee Party, the No Labels group, Crash the Tea Party, the Brownbaggers, The Other 95%, A New Way Forward, the One Nation Movement... on and on it went. Now, disgraced communist and truther Van Jones is trying to set up the American Dream Movement, an ironic name from someone who hates the country as much as he does. It wasn't enough for the Coffee Party USA to share its initials with the Communist Party USA, now there's an open communist forming another version.

None of them amounted to anything. They had a lot of publicity and write ups in big media outlets like the Washington Post and New York Times, but were just meaningless blips. I live in one of the most leftist states in the union and they weren't more than a few white dudes in a coffee shop here, and only met once or twice each.

At Instapundit, Glenn Reynolds mocks the new attempt by Jones, but a reader had the best reaction:

Liberals have their own Tea Party. Witness the events in Madison, Wisc. and other state capitals earlier this year. Liberals were able to gather significant numbers of passionate protesters in a short period of time. Public sector unions are the liberal Tea Party.

The problem for liberals is that they need to extend their appeal beyond that narrow base. The Tea Party’s success is driven by the fact that it has gathered people with diverse viewpoints and united them on the single issue of government spending and taxes. As long as the battle lines are public sector unions vs. everyone else, liberals will continue to lose the debate.

And that's the big difference, the Tea Party is just folks who have had enough, regular people so outraged and frustrated with decades of contempt from the government and misuse of their money, compounded by horrible economic times, that they rose up in an unprecedented manner.

If the Arab Spring movement has any western equivalents, its the Tea Party: regular people connected by social media rising up for liberty.

On the other hand, the left's version is not just old and entrenched, not just funded by big special interests and top-down managed, but connected heavily to government and power. In essence this is a battle between the regular citizens of the US and the government sector. The citizens are tired of being the host for an increasingly aggressive parasite that demands more and more money while requiring greater control over their lives.

Its hard to see why on earth anyone, anywhere, would be against the Tea Party movement unless they're part of the problem and benefit from this system. But its easy to see why these other movements keep dying out. There's no passion or energy to fuel them, and an attempt to get ordinary citizens to struggle against themselves and for the parasite is not exactly going to inspire a lot of membership.

Its just sad to see so many on the left not get this, and think the worst of the Tea Party.
Posted by Christopher R Taylor at 9:59 AM

When you say "this is a battle between the regular citizens of the US and the private sector", I think you may have meant "public sector".

Whoops, you're right, I'll fix that.